After reading parts one and two of this series on the Arab Spring, you hopefully have a better grasp on what some of the major moments of the movements were, how the revolutionaries in various countries drew inspiration from each other, and the difficulties of transitioning to a democracy.  So, for this post, I thought I would offer a bit more synthesis and some of my own analysis about what these revolutions mean.

First of all, I would like to address a major issue that no one seems to be terribly interested in: should these movements be called revolutions?  The media was quick to label every uprising a “revolution,” as they have been with every major protest in the 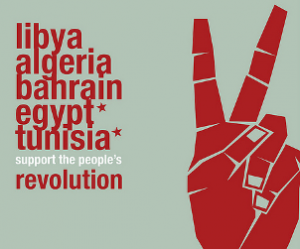 few decades, but a true revolution is marked by several distinctive characteristics that the Arab Spring does not necessarily share.   A revolution is “a fundamental change in political organization, especially the overthrow or renunciation of one government or ruler and the substitution of another by the governed,” with the key word there being “fundamental change.”  “Revolution” implies a complete overhaul of government, a change in the regime, or the structure and institutions of governance, and so far it doesn’t seem like any of the Arab Spring nations have accomplished this.  Some, like Egypt and Libya, have managed to overthrow their leaders, which is part of a revolution, but they have not undergone a complete regime change.  Democratic elections have been held in some countries, but only to elect transition governments who will then decide the structure of the new regime, and at this juncture it is hard to say whether or not they will be successful.  Of course I want them to succeed, but incidents like the recent news out of Egypt that soldiers are targeting female protesters (fair warning: video is fairly graphic and, if you watched CNN at all over the past few days you will have already seen it about 50 times) make me hesitant to say that a system overhaul is going to happen soon.  And in many countries, like Syria, the old government is still in power and shows no sign of stepping down soon, making true revolution even further away than it is in Egypt.

Regardless of whether or not these uprisings can really be called “revolutions” or just “movements” or “protests” (or “uprisings”), they have still had an enormous impact on the world stage.  Remember that post I wrote back in July about how Belarusians, inspired by the Arab Spring, were taking to streets in protests of their own? Well, 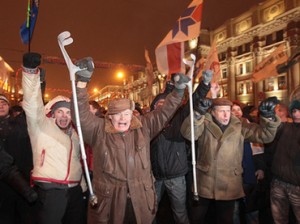 Belarusian dissidents are still active, though not at the same level as those in North Africa/the Middle East, in their fight against authoritarian leader Alexander Lukashenko.  It has even been suggested that North Korea will take a page from the Arab Spring after the recent death of Kim Jong-il, though that seems a bit far-fetched given the radically different conditions in North Korea.

Still, the fact that someone would even propose such a theory shows what an impact these protests have had.  These revolutions, like the revolutions in Central and Eastern Europe in 1989, have had a domino effect, with Tunisia erupting in December of last year, followed by Tunisia and Algeria and Libya et cetera after the new year, and now the question is who will follow?  There are still plenty of countries living under oppressive, authoritarian leaders, and with the world economy in decline conditions seem ripe for other nations to erupt in political and social upheaval.

The social media aspect is another source of inspiration for aspiring revolutionaries, as it is a cheap, fast, and fair effective way of mobilizing large numbers of people who are fed up with their government.  I imagine that, if the Arab Spring nations can follow through and manage successful regime changes (which could take decades), or even if they can’t, the model will be repeated in the future.