A lot has happened in the Middle East and North Africa in the last year, and if you’re anything like me you’ve had a difficult time trying to keep up with all the protests, names, elections, et cetera.  So I’m doing a 3-part series on the Arab Spring.  The first 2 posts will cover some of the major events (note: this is hardly a comprehensive list of everything that has happened—there has been so much unrest, so much violence, and so much general confusion that it would probably take 3 posts just to fully cover one country!  So this is just an overview of the major events in the countries that have been the most popular in the media—Tunisia, Egypt, Libya, and Syria) and the 3rd will synthesize the information and draw some conclusions.  I hope you enjoy!

Tunisia
December 17th, 2010—A peddler named Mohamed Bouazizi sets himself on fire after being slapped and insulted by a police officer, and that single act is believed to be the spark that lit the revolutionary fire in Tunisia. Demonstrations spread across the Sidi Bouzid province, quickly followed by an internet campaign that attracted interest across the country from all groups fed up with corruption, unemployment, and rising food prices.

January 14th, 2011—Tunisian president Zine al-Abidine Ben Ali is forced out, and flees to Saudi Arabia with his family. The Prime Minister, Mohamed Ghannouchi, takes over as interim President, a move that did not impress the protesters, who argued that Ghannouchi was a member of Ben Ali’s corrupt elite and so was not really a change.  Protests and violence continue.

October 23rd, 2011—Elections are held to choose representatives for the new Constituent Assembly, which will draw up a new constitution and appoint a transitional government until the next elections are held.

November 14th, 2011—Results are announced. An Islamist party, the once-banned

Ennahda Party, won 89 out of 217 seats—triple that of the next biggest winner, the Congress for the Republic, which won 29 seats.  The rest were divided among smaller parties.

November 22nd, 2011—the first Constituent Assembly meeting was held, and the three main parties split the country’s top three jobs—prime minister, president, and assembly chairman—between themselves.  Demonstrators show up with banners to remind the Assembly and new government that they are being watched, and that they must remain true to the revolutionary demands of dignity and freedom.

December 5th, 2011—The Assembly announces that it will elect Tunisia’s next president tomorrow.

What’s Ahead—Even if the Assembly can agree on a new president and on a new constitution, it won’t be smooth sailing for Tunisia.  It’s been close to a year since the protests began, and the country is far from settled.  The country faces numerous challenges; the government instability is just the tip of the iceberg.  Tunisia faces high unemployment, economic turmoil, and myriad other issues.

January 26th, 2011—Protests continue, despite violent police crackdowns and the much-publicized shutting down of Twitter.

February 1st, 2011—After a week of protests, Egyptian President Hosini Mubarak announces that he will step down following elections to be held in September after a direct intervention by President Obama.  Protesters are not satisfied, and continue to demonstrate angrily.

February 10th, 2011—After 17 days of protests, Mubarak resigns, ending his 30 year regime.  Much celebration follows, though protesters return to the streets the next day.

February 13th, 2011—The military, which took control after Mubarak’s resignation, announces that it will suspend the constitution and dissolve parliament, redraft the constitution, and hold elections in 6 months.

March 19th, 2011—Egyptians vote on a constitutional referendum—the first one in the country’s history—and the referendum is overwhelmingly approved.

November 28th, 2011—Over 9 months after the military took control of Egypt, the country holds parliamentary elections—the first in 80 years.  Turnout is 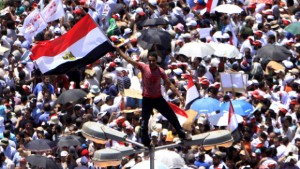 extraordinarily high, especially considering that the elections followed 10 days of protests.  The Muslim Brotherhood’s Freedom and Justice party won 37%, the largest share of the vote.

December 7th, 2011—the military council swore in a new Cabinet and gave the prime minister greater powers after it became clear that Islamist groups are headed for control of the first parliament.  The military said that it will remain the ultimate authority in Egypt until a president is elected next year (the November 28th elections were just the first of many—the final parliament, cabinet, and President won’t be selected until early January).

What’s Ahead—like Tunisia, Egypt has a rough road ahead of it.  Mubarak may be gone, but the country’s troubles are far from over.  The people know it, too: protests have continued throughout the year, and likely will continue next year.  The final make-up of the government is still up in the air, though it seems like the Muslim Brotherhood and other Islamist groups will win a large share of seats and positions, which worries many observers.