On Friday of last week, the House of Representatives passed a bill approving the foreign aid budget for 2012. Anticipating that the Senate will pass the bill this week, the winners and losers of the proposed budget allocations becomes clear. Foreign aid has become a big target in this economic recession, with government more hesitant than ever to spend money abroad. For this reason, there was a heightened anticipation of major spending cuts from the development community.

Overall, there were some re-allocations; some countries receiving more while others are going to be getting less. The State Department saw a decrease of $6 billion from 2011, bring their budget for next year to $42.1 billion. With additional funds earmarked specifically for war-related foreign aid in Afghanistan (another $11.2 billion) the State Department views this as a warning for potential deeper cuts in years to come.

Pakistan is a country where funds increased for next year, jumping to $850 million to be used towards military development. Pakistan is one example of the US putting restrictions on this money however, citing that 60 percent of this funding is contingent upon the country showing improvements in fighting the creation explosive devices and fighting militants.

Egypt is another major recipient, but with contingencies tied to receiving it’s funds as well.  With $1.3 billion in military aid and an additional $250 million in economic aid tied to maintaining status quo with Israel as well as a visible transition of power from military to civilian rule, the US is making sure our agenda with Egypt is maintained as we offer continued support.

Besides countries, multilateral agencies also saw cuts in US contributions; the UN and subsidiary organizations as well as USAID saw donations decrease this year. While this is never a positive thing to hear; it is especially worrying in a world today where famine, natural disasters, and revolutions are requiring additional global support.  When typically it is these multilateral agencies that are first to arrive and last to leave those countries where need is greatest, with less funding available a greater burden will fall upon international governments to offer necessary supplementary support.

Another issue that the development community is frustrated about is that this proposed budget focuses most of the resources towards war related assignments. This leaves less funding available towards humanitarian aid and relief projects. By tying finances to post-war reconstruction or military rehabilitation, less is available for food aid, education, and expanding health services.

This budget is $2.4 billion less than what the Obama administration initially asked for. To put 42.1 billion into perspective, this week Congress also approved a budget of $518 billion for the core Pentagon spending in 2012 as well. Therefore, not only is much of the aid already earmarked for military purposes, it will not account for the projects the Pentagon will be undertaking as well.

When Americans think of foreign aid, images of disaster relief and food donations are conjured as opposed to post-war reconstruction and political concessions. They are not mutually exclusive, and this idea that the US is not obligated to feed the world’s people must be changed. Ideas like these are perpetuated when politicians are determined to cut spending on issues that take finances away from the military or domestic politics. However, even the director of the CIA David Patreaus once claimed, 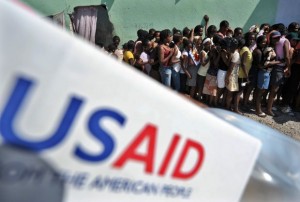 “I am concerned that levels of funding for our State Department and USAID partners will not sufficiently enable them to build on the hard-fought security achievements of our men and women in uniform. Inadequate resourcing of our civilian partners could, in fact, jeopardize accomplishments of the overall mission.”

I agree with this idea that foreign aid must be used to support the military, but I also believe that it should be left open-ended, so it can be allocated to address the growing needs in other sectors as well. It seems that recently the burden of addressing health and expanding education abroad has been left to private donations and organizations. While this is a positive sign that there are some people who will take international issues into their own hands, we must demand expanded support from the government as well. While yes, we are in a time of recession and tight budgets, but we all must remember that there are always people and countries much worse off than we can ever claim to be.