economic and political situation since the collapse of the Soviet Union in 1991. The poverty rate illustrates this struggle. The percentage of people living under just $2 a day was 66% in 2008.

To combat poverty in Laos, a project called the Poverty Reduction Project was initiated to help develop communities in the rural areas. This project was funded by the International Development Association. The goal of this project was to improve access to basic economic and social services in rural areas; more specifically access to clean water, health care, primary education, and roads. With the help of the project staff and local volunteers, the project had upgraded more than 2,000 kilometers of roads, 460 schools have been built, and 900 villages have access to clean water now. However, this project was stopped in 2011, meaning there needs to be another project running to address the country’s problems. Extreme poverty is common in mountainous areas where ethnic minority groups reside. Lowland areas tend to have lower poverty levels. If you do not live in the capital, it is common for people to live without basic facilities such as electricity. Strategies such as the Poverty Reduction Project need to operate in the long-run to have long term effects. This holds true with any policies or strategies implemented to better a community. Changes must be made for the future of Laos.

This is my suggestion to address the current problem in Laos. I think that focusing on the creation of transportation; more specifically, road transportation will help alleviate poverty. Using the Poverty Reduction Fund as an example, this plan will need to be cost-effective and will need funding from multiple organizations as the cost will be 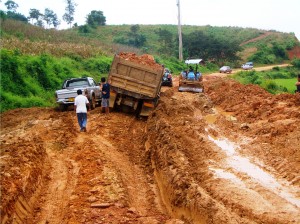 tremendous.The conditions of roads in Laos are horrendous, as it is difficult to get anywhere if it is not dry. Many roads, especially in rural areas, are not even paved, it is just made out of dirt. Whenever it rains, it is almost impossible to get anywhere. Having paved roads is considered a privilege. I think that creating paved roads will enhance Laos’s economy and the Poverty Reduction Project has shown positive results. To start off with, I think that creating roads that connect rural areas to the capital city is very important. Many rural areas in  Laos are very isolated as they do not have access to roads, government services, education, and the market. Creating paved roads will allow access to these services that will benefit people living in the outskirts of Laos.

The lack of paved roads also has an indirect effect on the agricultural sector as rural citizens do not obtain education. The agricultural sector provides 75% of employment in Laos, but less than 5% of the land is sufficient for subsistence farming. With so little land to harvest and so many people relying on agriculture for survival, there needs to be ways to efficiently use those land. Nevertheless, with the lack of education, the people of Laos are using traditional and outdated agricultural techniques instead of new and innovative techniques. This is very inefficient and hinders growth. This lack of physical infrastructure hampers  the development of Laos’s economy. Imagine if you cannot get to school just because the roads are not accessible? It is not very exciting. Hence, the creation of paved roads will allow access to these basic resource such as education and government services, which will encourage innovative thinking and social protection. More people will be able to obtain education and new technologies will be introduced to become more efficient. Hopefully this will translate into an increase in agricultural output and a reduction in poverty.

The level of poverty in Laos is extremely high and that needs to be changed. Using the Poverty Reduction Fund as an example, a new strategy must take place to address the current problem. What do you think are necessary steps to reduce poverty in Laos and other countries? Please feel free to leave a comment.