and the recent news about Komen, I thought it was important to reiterate the services provided by Planned Parenthood, and to highlight who uses these services in the United States and worldwide.

Naturally, when Komen Foundation, an organization concerned with women and cancer, pulled their funding for the very cancer screenings that save lives or play a role in extending them, people were upset and confused.  Planned Parenthood offers a multitude of services, including cancer screenings – an effort that has been shared and supported by other women’s health groups, including Komen.  Komen’s decision to pull funding for cancer screenings came after Vice President for Public Policy, Karen Handel, took her position and instated a rule that funding would not be provided to any group which is under any sort of federal, state or local investigation.  As it happens, Planned Parenthood is under investigation for how it allocates funding towards abortion services and non-abortion services. Incidentally, Komen did not make any decision to remove funding for Penn State University, which is also under federal investigation.  The move to stop funding Planned Parenthood appeared to many to have been politically fueled.  Although Planned Parenthood is under investigation regarding use of it’s Title X funding for abortions, the organization does provide records regarding the use and sources of monies.

Much of Planned Parenthood’s early funding came through founder Margaret Sanger’s contacts and supporters, including her very wealthy second husband. By 2008, total revenue reached almost one billion dollars, broken down to: 36% from health center income, 34% from government grants (including Title X funding – the only federal program dedicated to family planning), 24% from contributions, and the remaining 6% from other, not specified, sources. The same year, expenses reached almost 900 million dollars, broken down to: 67% for medical services, 15% for non-medical domestic program services, 12% to management and general support, 5% for fundraising, and 1% to international family planning.

Despite this, Planned Parenthood makes publicly available how their services are used.  The organization 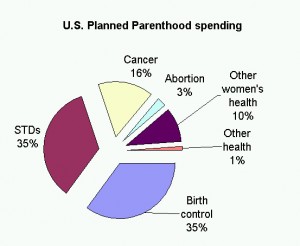 seems to remain committed to preventative care services.  Eighty-two percent of clients receive services to prevent unintended pregnancy. An estimated 595,000 unintended pregnancies and 283,000 abortions are avoided each year through contraceptives provided by PPFA.  In 2008, almost 11 million total patient care services (to three million people) were provided at affiliate health centers in the realm of sexual and reproductive healthcare. Contraception remains the largest portion of services, at 35%, followed closely by testing and treatment of STDs/STIs, at 34%. Cancer screening and prevention made up 17% of services that year, while other women’s health services, including pregnancy testing, constituted 10%. Arguably the most controversial of services—certainly the one receiving the most media attention—abortion procedures, made up just 3% of all services. The remaining 1% of services includes things like primary care patients and adoption referrals.

This health organization serves both men and women, young and old. Seventy-seven percent of health center clients are age 20 and older. Over 70% of health clinic clients have incomes at or below 150% of the federal poverty level. The number of male clients has increased 91% since 1999. More than three million women (and men) visit PPFA affiliate health centers annually, and more than one million additional persons are served through affiliate educational programs. As a sign of the organization’s reach, one in four women in the U.S. has visited a PPFA health center at least once in her life.  If funding for Planned Parenthood were actually to have been lost, whom else would it have impacted?  The organization plays a major role in health care provision for those with low incomes, the uninsured, and people in rural areas.  Many people in the United States who go without health insurance also happen to be people of color and immigrants.  The 97 percent of services that Planned Parenthood regularly provides (that is, all of those non-abortion services) are a huge safety net for people who cannot afford birth control, or regular check ups at other primary care facilities.

Abortion and even family planning with use of contraceptive devices (such as condoms or birth control pills) can be contentious, and are widely impacted by religious and social values.  It would be unfortunate, however, for the wide array of services that Planned Parenthood provides, such as those cancer screenings that are partially funded by Komen, or the family planning services that are used by so many Americans, to be slowly eroded by loss of funding for political reasons.  The most important thing is that we

To learn more about Planned Parenthood, including locations near you and the services provided, visit their website.