Recently all I have been hearing on the news about Libya is the issue of prisoner abuse.  It has been alleged that the prisons scattered throughout Libya are the sites of reprisals against the supporters of the ousted Gaddafi regime, as well as people the militias have grudges against due to tribal and regional differences.  One of the complicating issues with this is determining who is to blame for what.  There are a myriad of militias united along both regional and religious lines that answer to no one and many of the prisons are under the custodianship of these various militias.  This makes it hard to tell where the abuses are, who is responsible, and how it can be fixed.

The most talked about of these prisons is the one found in Misrata, Libya’s third largest city, where Medecins Sans Frontieres, the French Doctors Without Borders, has pulled out in protest of the abuse.  They claim that 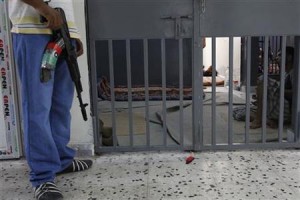 prisoners are being routinely tortured and that prison officials were asking them to treat prisoners only long enough to make them fit for further torture.  This highlights one of the greatest threats to the long term development of the new Libya; that of the unaccountability of the militias.

But who are these militias and why do they do this?  When most Americans hear the word militia in the context of the Middle East they automatically imagine groups like Hamas or Hezbollah, and rightly so. However, it is important to keep in mind that what we now call “militias” we called “freedom fighter brigades” not even a year ago.  Today there are loud calls for these groups to disarm, but so far they refuse to.  Some of these militias are Islamist in nature and fall into the same category of Hamas and Hezbollah, but most are regional in nature and lack a long term political agenda.  I admit that their claims of “safe guarding the revolution” sounds as fishy to me as I’m sure they do to you but Libya is undeniably in a period of change, to say the least.  The possibility of another Gaddafi-like ruler rising is a frighteningly real one.  Until the government can prove its good intentions these people are reasonable in their caution.  Now I do not mean to sound like I am trying to excuse what they are doing in the prisons, I am absolutely not, I am simply trying to make the point that these men who we praised as rebels a year ago are rightfully holding on to their distrust of government until they are sure that it has in fact been a successful revolution.

So that explains why they have not yet disarmed but what does this have to do with the abuse?  The answer is the regional nature of the militias.  As I said the worst of these allegations come from Misrata, the site one of the most prolonged and devastating battles of the revolution.  Misrata is only about 100 miles from the capitol, Tripoli, and was captured by the rebels early on.  As you can imagine this turned Misrata into a large scale engagement symbolic of revolution at large with the well-motivated rebels fighting the well-supplied government troops, which resulted in thousands of causalities on both sides.  The devastation in Misrata has caused much anger to be directed at suspected Gadaffi loyalists and is the direct cause of the abuse.  The fact that this anger is completely justifiable is extremely dangerous, as men who can justify their actions can ignore their conscious and project this sense of justification onto atrocities such as torture.

Is there a solution to this problem?  There is one, and only one, and that is the interim government.  Many have said that the first issue the government needs to resolve is disarming the militias but as we know this is not going to happen soon.  But would the militias be willing to give up the prisons?  In truth no one can know at this point but it is not inconceivable that they might be willing to handover the prisons before they disarm as this would not jeopardize their position as “guardians of the revolution”.  Now, the government has been accused of abuses itself but it has also shown a desire to remain in a favorable position in the international community.  To put it simply the militias have to worry about regional accountability but the government has to worry about international accountability.  And while it is hard to be forgiving of the men who destroyed your home its easier if it is not as personal, which can be accomplished by moving prisoners to jails away from the areas they terrorized.  If the government can negotiate for a hand over of the prisons it would give them a good chance to prove their worth to the Libyan people and their intentions to the international community.  Right now the ball is completely in Libya’s court but if the government and the militias are willing to negotiate a handover it would be the first step in bridging the distrust between them and the militias, and could be used as a litmus test as to their intentions for the nation at large.  This in turn could weaken the “guardians of the revolution” claim and possibly bring about a happy end to this sad chapter in Libyan history.

We, and by that I mean all people outside Libya, can help by supporting and donating to groups such as Human Rights Watch and Amnesty International.  Pressure from these groups is already seeing results as Libyan officials have now started taking steps to address this issue.