We all know that the no-fly zone and military action in Libya is ongoing, but what few people know is that the action was undertaken using the Responsibility to Protect doctrine and as such is fairly controversial.  The United Nations enacted Responsibility to Protect (RtoP or R2P) during the 2005 UN World Summit as a response to the inability to prevent genocide in Rwanda and Bosnia.  The commitment states that:

The mechanism for enacting RtoP is fairly complex, with the Security Council (China, France, Russia, the UK, and the US, plus 10 non-permanent members), UN Secretary-General, the General Assembly, and other international bodies all having the opportunity to act in the name of RtoP.  In Libya’s case, it was the Security Council that agreed that RtoP needed to be applied, though other international organizations like the Arab League, the African Union, and the Human Rights Council, all acted before the UN did.  It’s important to note that regional bodies are supposed to act first to resolve the issue, and only if they cannot is it referred to the Security Council, which prevents abuse of power.  Otherwise, the 5 permanent members would be sitting around dictating to everyone else.  Also, the methods used to apply RtoP vary from country to country.  In most cases diplomacy is the main tactic, with Libya being one of the few cases where the use of military force was considered necessary.

Gadhafi’s rhetoric was largely what red-flagged the country for RtoP application, and it is part of what distinguishes Libya from Syria and the rest of the Arab Spring countries.  In his speeches Gadhafi referred to the protesters as “cockroaches” and later 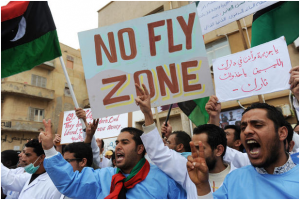 “rats” and “vermin” who had to be eliminated.  To anyone who has seen Hotel Rwanda, these words should sound very familiar and very worrying… which is exactly what the UN and other regional organizations thought.  In Syria, on the other hand, the government has been much more careful about their phrasing, and so many regional organizations have not reacted to the violence in Syria in the same way they did to the violence in Libya.  Further, the Syrian government has more allies than the Libyan government, and those allies will oppose any military intervention in the country like the one in Libya.  Russia and China, permanent Security Council members, have already refused to back a resolution condemning Syria, and while the recent increases in violence might change their mind, it is unlikely there will ever be military intervention in Syria.

Another reason for military action in Libya is that force has a better chance of working there than anywhere else, and all other forms of leverage were either inadequate or completely nonexistent.  The US and the UN have been criticized for reacting strongly against Libya while seeming to ignore other countries like Yemen and Bahrain (and Syria), but supporters of the action argue that other methods of leverage, including diplomacy, have a better chance of working.  Further, the UN dislikes using military force for RtoP, stating that it should only occur under the most extreme circumstances, like genocide, and Libya meets the criteria better than any of the other countries.  Because of this, some argue that the Libyan regime’s actions justify military intervention, while the actions of the other Arab regimes do not—thus far.  They argue that military intervention is a last resort, not a go-to solution, and as such the other countries involved in the Arab Spring are not in a dire enough situation to warrant the use of military force.  Others argue, however, that the violence and fear of genocide is just as strong in countries like Syria, and that there should be a military intervention under RtoP.  There has been a serious violent crackdown in Syria, and yet there are no immediate plans to intervene, and similar situations seem to be brewing in Bahrain and Yemen.