On March 17th, the United Nations Security Council voted to establish a no-fly zone over Libya, which allows for all measures short of foreign occupation. This is an addition to Libya being referred to the International Criminal Court (ICC), which I wrote about in my blog on March 3rd, and which itself was unprecedented in international law. Operations began on the 19th with a volley of missiles from a coalition of states, including the United States.

There are a few things going on here, some of which are inspiring, but most of which are actually quite disheartening. The steps that the international community are taking hearken back to the concept of Responsibility to Protect (R2P) adopted at the United Nations World Summit in 2005. R2P obligates states to protect and uphold the human rights of their citizens and, if they are unable or unwilling to do so, requires the interference of the international community, even up to military intervention. This would seem to be what is happening in Libya now, with the ICC referral, the embargoes and the no-fly zone.

On the face of it, this could be an excellent opportunity for the world’s governments to show their dedication to human rights and the evolving system of international law. Unfortunately, I believe there is a more likely and far less noble cause and effect at play. On the 17th I wrote about the interference of states like Russia, China and the US in Sudan and Haiti. Sudan has been experiencing difficulties similar to those being faced by Libya now for quite some time, but the level of military attention Libya is seeing was never even considered for Sudan. Unfortunately, a fairly shallow look at the different political situations the two states have can be used to explain the discrepancy. China and Russia both have very strong economic ties to Sudan, especially when it comes to small arms dealing. Chaos on the ground, then, is directly linked to economic prosperity for them.

On the other hand, Libya is one of the most oil rich states in the world, and 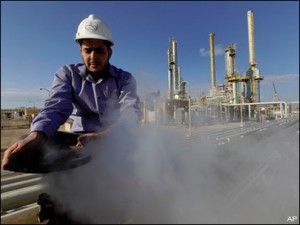 instability is not at all beneficial, especially given the dramatic increase in gas prices since the beginning of the conflict in Libya. Although I am not a big fan of cynicism, I’m afraid that it is very warranted in this case.

The high-minded ideals of freedom and democracy have too often been used in defense of purely selfish political agendas. I believe that there is a chance that the protection of human rights, and perhaps even a better government made by and for the Libyan people, could be the end result of this international intervention. I also find it hopeful that the Security Council explicitly limited operations to anything except actual occupation, but we cannot forget the politics of the situation. The Libyan people deserve to be heard, and I support their revolution. But we must be wary of the rhetoric our governments use when they talk about “defending human rights” when it is only self-interest that motivates their actions.