Yesterday, April 6, marked the17th anniversary of the assassination of Rwandan President Juvénal Habyarimana which catalyzed a genocide in which 800,000 Tutsis (a Rwandan minority) and moderate Hutus (part of the majority) were systematically murdered in a three month span.

A former supervisor of mine was in the United Nations Department of Peacekeeping Operations (DPKO) at that time, and he was put on the ground in Rwanda some two months into the slaughter, after the UN had finally garnered the political will it needed to become involved. He told me that he was advised to brace for the smell. As he stepped off 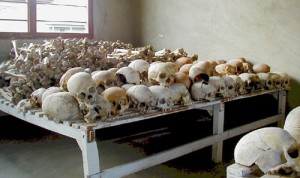 of the plane into the airport, he said that the smell of death was overpowering as it came in through the shattered windows.

Rwanda remains one of the greatest tragedies and embarrassments for the international community of the last several decades. Recalling the events of the first and second UNOSOM missions, during which a pullout of US support ended in disaster, the UN membership and then DPKO Director Kofi Annan were unwilling to heed the warnings of Roméo Dallaire, the officer in charge of the Rwandan peacekeeping force. Dallaire reported on the weapons caches that he had discovered, as well as the intense propaganda that was the lead up to the start of the genocide. The murder of ten Belgian peacekeepers, whose force served as the backbone of the operation, led to the reduction in the size of the UN’s force in Rwanda to 270. The US and a large part of the international community refused to define the slaughter as a genocide as it happened, because that would have entailed a responsibility to act under international law.

I recently did a podcast on the Responsibility to Protect (R2P), a concept that was in part born out of the aftermath of the Rwandan Genocide, along with the massacres in Srebrenica, the failure in Somalia, the genocide committed by the Khmer Rouge, and other massive crimes against humanity. On this day of remembrance, as we mourn the dead and think on the overwhelming failure of the international community to act accordingly in the face of incredible injustice and enormous loss of human life, it is so very important that we renew our commitment to the protection of the human rights of those whose governments have proven unwilling or unable to do so themselves.

We must, collectively and as a community of global citizens, make a commitment to never again allow a Rwanda. The United Nations is holding a commemoration today that will feature survivor testimonies, and speeches on the themes of reconciliation and education in order to prevent genocide. History without education is doomed to repeat itself. We can no longer claim ignorance, not in a world of instantaneous information and perpetual connection. We have learned lessons from the failure to act in Rwanda, and it is our responsibility to inscribe those lessons on our hearts.

I encourage you to educate yourself about this tragedy, and to give your support to the survivors of Rwanda and the members of the Rwandan community who are working tirelessly to rebuild their country to this day. Here are a list of organizations that could benefit from your interest and support.