The religious crisis in Arakan state, Burma against the Rohingya Muslims is escalating by the second. I had previously written about this subject in my blog posts, but I want to update everyone on what is currently going on. To briefly explain what the conflict is about, there are groups of Buddhist extremists and Burmese citizens killing 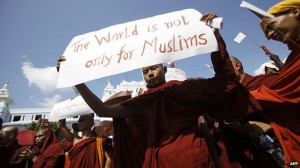 and displacing thousands of Muslims in Burma. The conflict has been amplifying and is currently spilling over to neighboring countries such as India, Indonesia, and Malaysia. Tensions between Muslims and Buddhist have been intensifying in these neighboring countries. Many news sources have indicated that this conflict has a potential to become the next Rwanda. This conflict, that started in a small area in Burma is now threatening the security of Southeast Asian countries. Why is this conflict spreading and why hasn’t there been any solutions yet?

Just recently, President Thein Sein of Burma paid a visit to the UK. Prime Minister David Cameron had offered assistance to help Burma continue its so-called path to democracy. I am aware that Burma is still young and there needs to be  tremendous amounts of things to reform and strengthen within its state, but if it was truly on the path to democracy, why hasn’t there been any measures taken to address the current religious problem? This current outrage could have been a chance for President Thein to show off his democratic leadership and intervened righteously. However, the government has failed to recognize the real problem of the conflict and has even suggested to use birth controls to limit the number of Rohingyas living in Burma. To restrict Rohingyas, there has also been immigration policies where only families with up to two children are allowed in Burma. On top of that, although I have previously only mentioned that Buddhist extremists and citizens have been part of this chaotic event, in fact state security forces and political party leaders have also been part of the mass killing of Rohingya Muslims. It is clear that President Thein is not on the right path to democracy.

When I saw the press release of the day President Thein visited the UK, it seemed to me like the officials, including Prime Minister Cameron and Foreign Secretary William Hague were soft and easy towards the President. In fact, 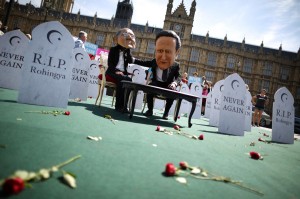 although they had discussed humanitarian and human rights issues, I sensed a little tone of appraisal for President Thein even though he has not delivered sworn changes. The public knows what has and is going on in Burma, I think the Prime Minister should put more pressure on the Burmese government to ensure political and economic progress.

The UK has offered to help Burma by providing military training, but to me it sounds like a touchy issue to tackle. Although the military training does include lessons regarding human rights and laws of armed conflict, I am very skeptical about the government using the training to its own selfish needs. Like I had mentioned before, state security forces have been part of the current conflict, making it hard to even trust the government. President Thein is of course, not  completely a horrible leader. The country has experienced greater open communication and has been developing since his duty began, but on certain subjects he falls through on the people’s expectations. Though, I truly believe that the UK will make a difference in Burma, the UK will need to keep a close eye on the Burmese government to insure the country’s righteous path to democracy.

How do you think the UK should help assist Burma? Do you think Burma will be able to become a democratic country?