Burma is known for its ethnic tensions within the country, but did you know that religious tensions are heightening as you are reading this? The largest religious group in Burma are Buddhists and 89% of the people practice it. The second largest religious groups are the Christians and Muslims which each accounting for 4% of the population. What is going on in this area right now is religious cleansing by the Buddhist extremist group called “969” and they are targeting Muslims and spreading anti-Muslim sentiments. Extremists have been boycotting and attacking 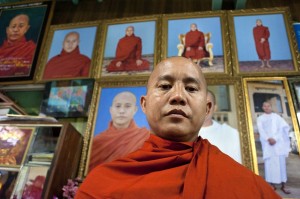 innocent Muslims. More than 200 people have been killed and more than 140,000 have been displaced because of this group. The Buddhist extremists started rampaging Muslims last year and has been gaining momentum. Something needs to be done to stop this religious cleansing.

Looking back at history, you don’t really hear much about Buddhism getting into conflicts with other religions. Let alone, you don’t really hear about Buddhists acting violently. This probably has to do with the fact that Buddhism is very tolerant of other religions and agrees with the moral teachings of other religions.This is where it gets a little puzzling for me. The 969 Buddhists are going out there and destroying the lives of innocent Muslims in Burma. Why is this group so different from the rest of the Buddhist in the world today and why do they have so much hatred towards Muslims? The 969 group is lead by a monk named Ashin Wirathu and he has been preaching sermons about how Muslims are troublemakers. They think that Muslims are taking 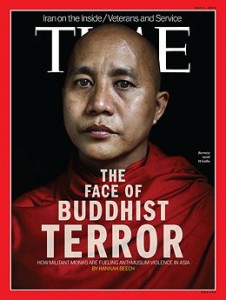 over Buddhist owned land and having more children than Buddhists. Wirathu is afraid that the land of Burma is getting into the hands of Muslims so he feels the need to eradicate them. He kind of sounds like a neo-Hitler trying to get rid of any potential competition.

To me it seems like Wirathu is just using the name of Buddhism to unite people to go against Muslims. It is more of an economic and racial problem than a religious one. It is true that there is an increasing number of Muslims coming into Burma from neighboring Bangladesh. Wirathu is probably feeling anxious about the influx of Muslims into Burma and is resolving the problem by making it a religious problem. Like I had mentioned earlier, Buddhism is practiced by the majority of the people; what more better way than using religion as a mechanism of unification against the outsider? It may have been a smart move by him but it has created chaos and something does need to occur to stop this cleansing and using the name of religion to kill other human beings.

Coming up with a potential solution was pretty hard for this topic. This is how I came up with my solution. Burma is a very young democratic country and is still taking baby steps towards development. All sectors of the state are still weak and lack power to stop such conflicts within its country. That is why there are still vast amounts of religious and ethnic conflicts in this region. If its own state cannot fully protect its people, then it needs to gain help from outside states. I think Burma should utilize the ASEAN Summits to address the problem to obtain help from their fellow members. ASEAN has previously been engaging in nonviolent conflict management where they have solved territorial disputes between member states using tactics such as mediation, negotiation, and cooperation with NGOs and the international community.  Though until recently, many members have been reluctant to discuss their intrastate conflict during the summit, due to interdependence amongst the member states, regional conflicts are bound to become international conflicts. ASEAN has a great potential in helping the Buddhist extremists and Muslims to put aside their differences and live harmoniously. As the ASEAN charter states it will “adhere to the principles of democracy, the rule of law and good governance, respect for and protection of human rights and fundamental freedoms.” I hope that this statement will be addressed for this particular conflict. Not only will the involvement of ASEAN help Burma resolve its conflict, it will be able to establish stronger ties amongst their member states, which is one of their main goals as an organization.

What do you think can be done to stop the conflict between the 969 Buddhist group and Muslims in Burma?