Some people might wonder why I am writing a blog post about the South Thailand Insurgency. It is well known that this Islamic insurgency took place in 2004 and had experienced its peak in 2007. It may seem like an outdated conflict that had dissipated throughout the years, but it is in fact still an ongoing conflict. Drive through shootings, bombings, and other attacks on civilians and military personnel are still persistent in this region.

Before I jump into analyzing the current conflict, I will first give you an overview of the insurgency. Although the start

date of the insurgency took place in 2004, the conflict was present in Thailand since its early days as an independent state. The southern part of Thailand, which is known as the Pattani region, was annexed in 1906. This region, touching the borders of Malaysia, is majorly inhabited with Malay Muslims who learned the national language of Thailand and were given Thai names. According to the International Crisis Group study reported in 2008, the Malay Muslims who have been living in a Buddhist majority country accumulated a profound sense of alienation. Since then, the tensions between Thai Buddhists and Malay Muslims started to increase, resulting in attacks and insurgencies led by the Malay Muslims. Many of these attacks have been in the forms of shooting, bombing and decapitating people. Over 5,000 people have been killed since the beginning of the conflict and people are still being killed today.

Until recently, these insurgent groups were only targeting Buddhists, but reports have shown that they are now targeting anyone that is in Southern Thailand.. Their former intentions were to seek recognition and representation of their ethnic group, but now the intentions are blurred. The insurgency group is very secretive of their operations that even some parents do not know that their children are part of the group. This has complicated the intentions of the insurgency group and have left many officials perplexed on how to reconcile the issue.

Many steps have taken place by the governments to resolve this conflict throughout the past. A hand full of development and social programs have been initiated to show that that the 80% of the Malay Muslims that live in the southern region are an essential part of the state. These programs have cost Thailand over $7 billion but, insurgent groups have overlooked such propositions and are still continuing their course. With the help by the Malaysian government, this spring the Thai government and one of the largest insurgent group, Barisan Revolusi Nasional, engaged in a mediated peace talk, but violence grew as other insurgent groups felt anger as the BRN was not a representation of all insurgent groups.

As seen above, it is pretty clear that this ethnic or religious separatist insurgency is very deep rooted and complicated. The Thai government has spent a large amount of money to help solve the problem, but nothing has worked. Then what can be done to end this almost one decade long conflict? I think that it must change from within. Reports have indicated that much of the anger within the Malay Muslim community is coming from the elders, who have more experience with alienation. The younger generations tend to be more open minded and are not as emotionally attached to the ongoing conflict. Maybe time will eventually help 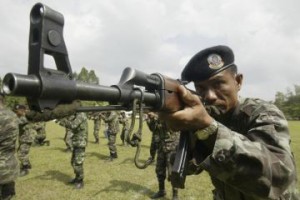 dissipate this conflict; however, that is not enough. Along with changing consciousness at the community level, the Thai government needs to truly see the root cause of this conflict.  The reason this even all started was because they felt alienated and felt like they were being forced to be identified as Thai. The over $7 billion of money spent to eradicate the insurgents will not help the situation. It also does not help the situation when the King in Thailand is required by law to be a Buddhist. The Thai government must acknowledge that Malay-Muslims want to live by their own traditions and culture. This also entails that the Malay-Muslims are not keen on globalization as it is another mechanism impeding their traditional living styles. Although it will be a hard task, the Thai government must create policies and assistance to the deep south both economically and politically.

Although this conflict is deep rooted and has been going for a very long time, the underlying issue is cultural recognition; which I think is something everyone can relate to.These actions are not tolerated and every single human being has a right to live as they desire. What do you suggest to help stop violent killings in southern Thailand?