My mom and I have had an ongoing debate for oh… approximately twenty years or so. About what exactly, you might be asking yourself? Nutrition. Childhood nutrition, to be exact. Our debate mainly rests on the question – when it comes to childhood nutrition, is restriction really the best way to go?

Let me set the scene for you… I loved going over my friends’ houses when I was younger. Their houses would have cabinets full of cookies, and chips, and all sorts of salty and sweet treats. All of my favorite things in one place – what more could I ask for? Their houses stood in stark contrast to my own house, which had (and still does have) a single snack drawer, which contains a bunch of Chewy granola bars, some microwaveable popcorn (light butter, of course), and a couple boxes of raisins. Not exactly your typical snack drawer – at least not from the perspective of an eight-year-old child. 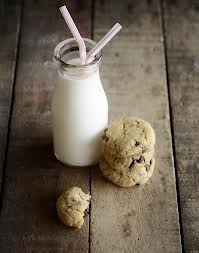 This profound lack of snack food in my house derived largely from my mom’s love for all things nutritional. Our cookie jar? Empty. Our fridge? Filled with fruits, vegetables, and a whole assortment of whole grains. It came down to the fact that my mom’s key rule when growing up is that my siblings and I weren’t allowed to buy anything in the grocery store over three grams of fat. I have many childhood memories, which consist of walking up and down the aisles of the grocery store, with my dad, brother, and sister, taking the time to pick up each and every single item – whether it was cereal, a box of crackers, or a bag of pretzels – in order to check out the nutritional facts. If it was four grams, there might be some hope for negotiation. Anything more had to be put back, no questions asked.

To be fair, my mom would allow the occasional treat here and there. We would be allowed a trip to the ice cream shop while on vacation, or cake at a family party. However, the majority of the time, nutritional facts ruled our lives –as we lived on the edge of a three gram barrier. Therefore, when I was young, I quickly became adept at sneaking food in order to satisfy my cravings. I would take some cookies here, some Halloween candy there. My worst offense of all was when I hid a half-gallon of Hershey’s Moose Tracks ice cream in my closet around age ten. Turns out ice cream melts. Lesson learned.

As we got older, my mom eventually became less restrictive about our diets, however my sweet tooth has continued to live on. So I did some research to find out why.

Turns out that our human predispositions for certain foods often begin from a very early age. Humans are genetically predisposed to innately prefer sweet and salty flavors, and dislike foods that are bitter or sour tasting. However, innate eating preferences only begin to explain a part of the picture. Environmental factors (such as parental involvement) have long played an important role in the development of childhood eating behaviors. Such nutritional attitudes and habits, which are acquired throughout childhood often persist far into adolescence and even adulthood.

The two main practices utilized by my mom, like so many others parents across the country when it comes to regulating childhood eating behaviors, were restriction and pressure. Restriction often takes the form of restricting the child’s access to junk foods or even their overall food intake. Pressure is often seen when parents pressure children to eat certain foods, like fruits and vegetables. Such practices are often used by parents in an attempt to control their children’s nutrition, and improve their child’s overall health. However, over time studies have found that pressuring children to eat actually leads to counterproductive results when it comes to childhood nutrition.

Take a study conducted at Penn State, for example. In the study, one group of children were seated at tables and were given unlimited access to plates of apples and peach cookie bars. Another group of children were given plates with only a couple of bars, while the rest were left in a clear cookie jar, which was placed at the center of the table. These children were told that they would be allowed to snack on the cookies in the cookie jar only after they waited a period of ten minutes. The researchers found that by restricting the cookies, consumption more than tripled for the groups of children studied.

In general, children whose food access has been highly restricted throughout childhood are far more likely to binge when they have access to the forbidden foods in the future. Studies have found that when parents begin to restrict their children’s own snack food intake, the kids are more likely to eat more of the restricted foods when they are placed in an environment in which the foods are made freely available and the parenting figures are not present. This is especially true for child-feeding practices that place restrictions on foods at the top of the food pyramid.

With a growing obesity epidemic in the United States, especially among children and adolescents (the prevalence of obesity among such age groups has almost tripled since 1980), I realize the importance of teaching children proper nutrition from a young age. Children should be taught to fill their plates with fruits, and vegetables, and other healthy options. However, children should not be completely forbidden from eating certain types of foods – aka cookies, cakes, and everything else sweet, salty, and delicious – all of the time. When restrictions are placed on foods that are high in energy density, sugar, salt, and fat, children develop an increased preference for such foods, and then more apt to choose these restricted foods due to their “forbidden” nature.