Sometimes, the strangest things can cause a rift, or continue to push apart, two countries.  It comes as no surprise that the United State and Iran are not ideologically on the same page.  The two nations have been at odds with one another over the development of nuclear energy, and over the years Iran has faced heavy sanctions from the United Nations.  For decades Iran and the US have battled one another over domestic and international policies, but now the two countries have a new issue at hand—pistachios.  The little green nut is at the center of international market dominance, with the United States, for the first time ever, coming on top.

Pistachios have long been known as a key commodity for Iranians, not just internationally, but culturally as well.  The nut is used in a variety of Persian dishes, and is as dear to Iranians as warm apple pie with ice cream is to Americans.  For years, Iran has been the leading producer of pistachios worldwide, and the nut serves as the leading non-oil export supporting the Iranian economy.  Unfortunately, the plethora of sanctions crippling Iran’s economy has now negatively impacted the nation’s pistachio exports.  With the sanctions in place, the domestic price of pistachios has jumped from $1.70 per kilogram to $48 per kilogram, and incited a boycott originating from Facebook.

Despite the fact that Facebook is illegal in Iran, the government has supported the boycott.  If locals refuse to purchase pistachios, more nuts will be available to sell internationally.  During a time when sanctions are all but decimating Iran’s economy, the Iranian government is looking for any ways to continue supporting the nation’s weak foreign revenues coffers.  Unfortunately for Iran, the export sanctions have provided the US with plenty of time to foster its own pistachio trade.  In 2012, California alone grew 600 million pounds of pistachios, and for the first time the US beat Iran in pistachio production. 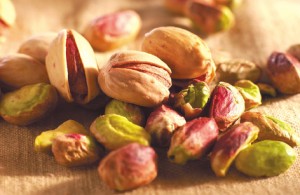 Now that Iran has lost its title as top pistachio producer, the country is attempting to both support its pistachio exports and appease angry Iranians at home.  However, in a counter-productive move, the Iranian government has decided to put in effect a six month export ban on pistachios.  The government will allow only local consumers to purchase pistachios, and hopes to regulate the inflated price of the popular nuts.  Nevertheless, Mohsen Jalalpour, head of the Iran Pistachio Association, believes that the government is making a huge mistake with the ban.  According to statistics, Iran exports 70 percent of its pistachios, and losing foreign revenue will further cripple the economy.  With pistachios being the largest non-oil export item, the ramifications of the ban will be felt across the country.

Though it may seem trivial to focus on a nut as small as the pistachio, the international impacts behind the politics of pistachios can reach far and wide.  First, it is possible that the cost of pistachios may go up in Asian countries, the biggest buyers of Iranian pistachios, since the market will have less of the nuts to sell.  However, that may be the least harrying concern for the world to focus on.  Iran, like North Korea, has been locked under UN sanctions in regards to an alleged nuclear program.  The country’s main source of income, oil exportation, has been on the decline, and without foreign revenue Iran will be unable to maintain its oil wells.

The issue regarding nuclear programs is unquestionable, and the international community should definitely get involved in stemming potentially dangerous nuclear attacks.  Iran has repeatedly claimed that it does not intend to make weapons, but rather produce fuel for its country.  Whether or not Iran plans on making nuclear weapons is up in the air, but the matter cannot be dealt with stifling UN sanctions.  Crippling an entire nation, made up of women, children, and the elderly, is unthinkable.  The fact that the sanctions affect even pistachio production is rather telling of how restricting they have come to be.  Instead of isolating Iran, the international community needs to open up diplomatic talks with the country.  Rather than making Iran an outsider who hates the West, perhaps it is time to invite the nation to peacefully explain its story.