It’s been a while since I’ve written about the Arab Spring, mostly because it’s not really the “Arab Spring” anymore. Egypt, Syria, Libya, and others, have been struggling for two years now, and there is little hope that the conflict will be resolved any time soon, particularly in Syria.   The violence in Syria has been particularly striking, and has, according to some, destroyed any sense of hope and positive change surrounding the Arab Spring.  So for this post, I thought I would discuss how the violence in Syria has spilled over and affected other countries, particularly Turkey. 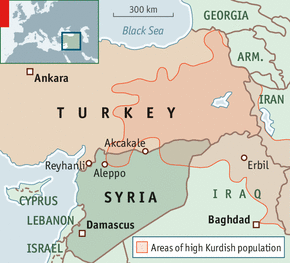 As you can see, Turkey and Syria share a fairly long border: 511 miles, to be exact.  Therefore, It’s not terribly surprising that violence from Syria has had an impact on Turkey since the very beginning of the crisis.  In August of 2011 the Turkish government, believing that Assad’s regime would fall quickly, opened its doors to Syrian rebels and refugees.  The government denies arming the rebels, but the rebels suggest otherwise, stating that their Turkish brothers provided them with light weapons. Unfortunately for Turkey’s Prime Minister, Recep Tayyip Erdogan, the man who opened Turkey’s borders and promoted interventionalist policies towards Syria, the conflict was not resolved quickly and the United States has refused to intervene, and so the situation within Turkey has deteriorated.   There have been numerous border skirmishes since late 2012, and many Turks blame Erdogan for the current mess.

The most recent attack took place on 12th May, when two car bombs went off in the small border town of Reyhanli, killing 43 people.  The Turkish government has suggested that a Syrian intelligence agency planned the attack in order to turn the Turkish people against Syrian refugees, a lot of whom call Reyhanli home. 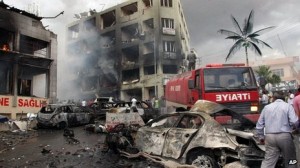 If the Syrian government was behind this (which it denies, of course) then it seems their plan has worked.  Turkish protesters have had several clashes with the police in Reyhanli in the the week since the attack, with many blaming Erdogan’s policies for the devastating bombing.  The government should never have let refugees live in towns, especially ones so close to the border and border security is too lax, the protesters insist.  The demonstrators also said that Turkish support for the Syrian rebels was putting Turkey in the line of fire, and so Erdogan must reconsider his position on Syria.  Supporting the rebels, offering them firearms, speaking out against Assad’s regime: all of these actions have consequences, and clearly the Turkish people are suffering from them.

What can Erdogan do, though?  Backing the rebels is clearly a dangerous move–there’s no doubt about that–but what are the alternatives?  All attempts to negotiate with Assad have failed, and Assad himself told an Argentinian paper that he does not expect the next upcoming conference on Syria (endorsed by the United States and Russia) to yield any type of resolution or end to the bloodshed.  Additionally, Assad insisted that he has no plans to resign any time soon, and he continued to refer to the rebels as “terrorists.”

So Turkey is–pardon the cliche–between a rock and a hard place.  Intervening in Syria, whether by continuing to 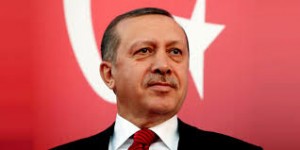 back the rebels or by actively becoming involved in the revolution, is dangerous and clearly not a popular option for the Turkish public.  Stepping back and letting the United States and Russia continue to attempt to negotiate with Assad, on the other hand, is not likely to stop the bloodshed in Syria either.  Furthermore, since Syria and Turkey do share such a porous border, violence in Syria is likely to continue to spill over into Turkey, regardless of whether or not the Turkish government agrees to try to close the border and increase security.  Smuggling is rampant along the border and skirmishes are fairly frequent, and likely will continue to be.

What do you think Erdogan should do?  Is he responsible for the attacks on Turkey?  Should he pull back on his interventionalist policies?  Or should he increase Turkey’s stake in Syria, perhaps by intervening more directly?  Let me know in the comments!