Have you heard about the new health program starting this September in New York City? Don’t worry, I hadn’t either until I stumbled across a news article the other day. It’s a program aimed at promoting breastfeeding over formula for newborn babies. But it’s only in New York City, so the rest of us don’t need to care right? Wrong. The level of state intervention over women’s bodies in this program could set a dangerous precedent for future similarly restrictive laws regarding women’s rights.
Like I said, the “Latch on NYC” program is meant to encourage women to breastfeed their babies. The program will be implemented largely through new hospital 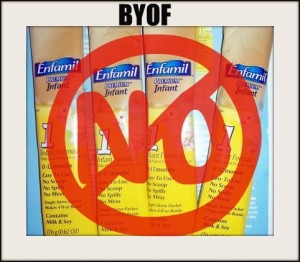 regulations and a public relations plan aimed at spreading awareness. In hospitals, baby formula will have to be signed out like medication, rather than freely given away. Formula ads will be removed from public areas. And women who request formula will be required to listen to a talkgiven by medical staff on the merits of breastfeeding over formula. Yes, it’s true that breastfeeding is great for infants. It increases overall health, lowers the risk of infection, and is a more natural process than formula. So Mayor Bloomberg does have good intentions and a solid basis for promoting breastfeeding. But is he really going about educating the general public in the right way?

There are so many other steps the city could take if they really only wanted to encourage breastfeeding. They could create a larger educational program beyond just posters to spread awareness about the positives aspects of breastfeeding. That way women could have as much information as possible and make their decision BEFORE giving birth. Or the city could subsidize lactation consultant services. These individuals go in and help women breastfeed when they’re having difficulty. Unfortunately, they can be extremely expensive and therefore not all women have access to their services. These steps alone would address the two biggest obstacles when it comes to breastfeeding: lack of knowledge and the potential difficulty of the process. But they would also be promoting breastfeeding in a positive way, unlike the current program. So the city could achieve its goal of increasing the number of women breastfeeding without forcing the decision on them.

And right now, the city is definitely trying to force a decision. According to the mayor, the program is meant to help mothers make choices and “limit practices that interfere with that choice”. But no where in the description of the program do I see steps meant to provide more freedom. Instead, I see practices that will restrict 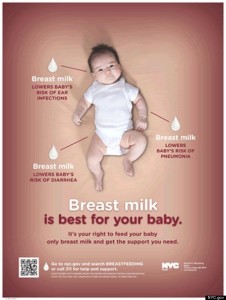 women’s choices on a very basic, personal level. The decision to breastfeed a child is a wonderful one if you choose to make it. But that’s just it, shouldn’t it be a woman’s choice how she wants to feed her child? Does the government really have the right to involve itself in the such an invasive manner? We wouldn’t want them forcing US to eat a particular thing. So why should we be forced to feed our children in a particular way as long as they’re healthy?

But maybe I still haven’t convinced you that this is something we ALL need to worry about. After all, it doesn’t directly affect you if you don’t live in New York City. But think about the deeper message Mayor Bloomberg is sending with this new program. If the city can regulate how you’re supposed to feed your child, what else do you think the government will try to control? Don’t the mandatory “talks” new mothers have to have with medical staff sound awfully similar to “talks” some women are forced to endure before receiving an abortion? Think about it: you’ve made a very personal decision about healthcare. But it’s a decision the government doesn’t agree with. So you have to listen to a lecture (trying to change your decision) before they’ll accept your choice. Sounds EXACTLY the same to me. It’s an attempt by the government to restrict your decision-making ability. And has the potential to happen over and over again. This new program is setting a dangerous precedent for what the government can reasonably regulate in the future. And the government simply shouldn’t have that level of control over our choices and our bodies.

So as you can see, this New York program has a important ramifications for everyone. We can’t let things slide simply because they don’t affect us now. Because odds are they will in the future. Isn’t it better to change the system now and strive for a program that helps without hurting the women involved? We have alternatives to “Latch on NYC”, so why don’t we use them? Because when it comes down to it, shouldn’t we be protecting women’s rights to make decisions not trying to control them?