Recently I wrote a piece on Brazil’s forced eviction and razing of slums in preparation for the upcoming 2014 World Cup and 2016 Summer Olympics. Brazil’s efforts were an attempt at glossing over poverty in a major emerging economy that is about to be in the spotlight for the whole world.  It’s easy to pass this off as an ambitious developing country’s misguided efforts to remove unsavory realities from the world’s line of sight. But, it’s not just something that developing country’s looking to impress the world do. This also happens in the most developed and leading country’s around the world, like the US. 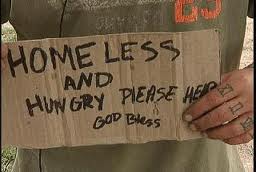 I thought it would be interesting to see the parallels of what happened (and will likely continue to happen in preparation for mega-events) in Brazil compared to my own country. I’ve heard the stories before of shifting the US’s poorest of the poor, homeless people, around when some sort of major event happens in a US city. What happens to these people when major events, especially sporting events, come into our cities?

Well, the answer is both disheartening and illogical. There is a long track record in the US of removing homeless people from out of sight for the occasion of events. There have been reports from homeless being removed for the Super Bowl (Atlanta) or almost removed in the case of Indianapolis (although it’s arguable that outrage generated by media coverage of plans for forced removal may have put a stop to this plan). Even political events, like the 2008 Democratic National Convention or Presidential inaugurations, warrant cities to remove their homeless people.

What’s really interesting is the ways in which homeless people are removed from sight. There are the harsher methods of getting rid of the homeless before big events such as increased arrests (through either stronger enforcement of existing laws or the creation of new ones making it easier to arrest homeless people). And then there are the methods that look like a city is being nice to the homeless; like opening shelters for longer hours, allowing the homeless into zoos or movie theaters, or offering one-way tickets out of town (where supposedly they will have family or job potential; but let’s be honest, it’s just about getting them out).

These ‘nice’ ways of dealing with the homeless for big events bothers me because it’s just disingenuous. So, for this one day homeless people will

be given special treatment just so revelers don’t have to see the “riffraff.” What about every other day? I think that people really do care to keep homeless people away from major events to keep them safe from the stress of large, often boisterous, crowds. But, I also think this is often used as a front to just have them out of sight and not causing problems. And, think of the cost this must incur for cities? Why is money wasted on a sweep-it-under-the-rug quick fix? All this effort and resources is invested to temporarily solve an issue, when these resources would be better used in dealing with homelessness before it becomes an issue.

This is an issue that runs deeper than the problem of just stopping the removal or shifting around of homeless people. To really address the issue, we must get to the root of the problem to find solutions. To fight this problem, we must fight poverty at its core. Homeless people don’t just need a place to sleep each night, a hot meal, or a one-way ticket to a new place. They need somewhere to go where they will learn how to get on their feet by learning job-training skills, getting assistance in finding work, and learning how to manage their money once they get a job. They need rehabilitation facilities for addiction and mental health institutions that will help them deal with mental illnesses.

How to do this? If your city is hosting any sort of major event, call upon your local politicians to encourage your local government to not engage in removing homeless people. Be active at local and national political events in raising awareness about homeless people’s issues and to generate policy-changing (or creating) dialogue. Help mobilize support in your own community by working with your local homeless shelters. Support national organizations like the National Coalition for the Homeless supporting legislation to protect homeless people. By working at the local and national level you can help address the issue of homelessness at its core.