HIV Test Now At A Pharmacy Near You

The reality is that many schools have money problems. Big money problems. Across the country there are major budget cuts and layoffs. Financial issues have been the main topic of conversation in schools for years. A recent solution that many schools have adopted is to allow companies advertising rights within the school, in exchange for a little cash. For many districts with serious budget problems, the money received through advertising becomes a saving grace. What’s the problem with a little brand name exposure if it means an improved music program for the school? More science equipment? Or that they finally will be able to purchase some computers for the library? What’s the harm done? 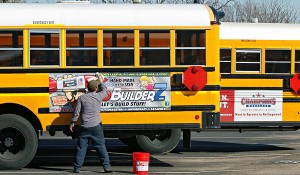 School sports fields have long been home to advertisements, promoting small town businesses and multinational corporations alike. Logos are often found on the scoreboards, nestled right between the scores of the game and amount of time remaining. School buses have also historically been a traditional advertising platform for schools. However, the advertising of today has turned into more than just athletic fields and buses. Company logos can now be found everywhere from the school hallway, to lockers, to vending machines in the cafeteria. Not even report cards are left untouched. At Jefferson County Public School District in Denver, a college savings program named CollegeInvest has the rights to advertise on the district’s report cards for the next three years, modeled after McDonald’s scheme in Seminole County in Florida just a few years before. 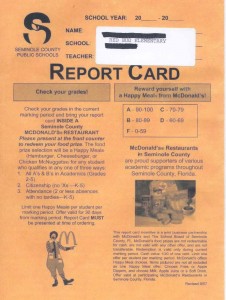 What’s the problem with advertising in schools? The problem comes at the divide between the opposing goals of schools and advertisers themselves. Advertisers don’t necessarily care about the children. They’re not concerned about their well-being, or education. Simply put, the main objective of many advertisers is to sell as many products as possible. Their intention is to sell a way of life, which promotes the product, by popularizing certain behaviors, values, and ideals. In the end, it’s a culture that promotes bolstering private profits rather than the public good.

Among the values of a commercial-based culture? First of all, it’s a culture, which emphasizes material goods over all else as way to achieving life satisfaction. It’s a culture of conformity. And more than anything else, it’s a culture based around the concept of brand loyalty. Did you know that basic brand loyalty starts as young as two? And that by age three, most children can differentiate one brand logo from another? Advertising in schools builds the perfect platform for advertisers to latch on to their cradle-to-grave mentality. While you might think that seeing a mere logo on a scoreboard is trivial in the scheme of things, a lifetime full of logos, advertising, and marketing campaigns is anything but. Brand loyalty becomes established in the minds of the students from the moment that they arrive at the school steps on their first day in kindergarten. Do you know why children are the most desirable target audience for advertisers? Because if you can catch a kid at age five, you’ve got them hooked for life.

This can be attributed to the fact that young school children are the most vulnerable of all the demographics. They aren’t able to put themselves in the minds of the advertising executives, and realize that the campaigns are put in place for the mere benefit of the company itself. It’s hard for children to shield themselves from an enemy, that they didn’t even know was there in the first place. In the words of developmental psychologist researcher Mark Blades, “at six years old, children don’t show awareness of advertising’s persuasive intent… Most do by eight years old, but even when children are aware of persuasive intent, they still see it as a benefit to the customer and not as a benefit to the seller.” 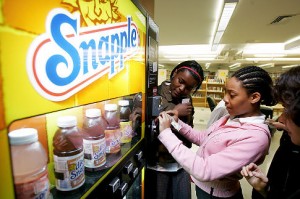 It’s not just the elementary crowd either. A study found that high school students were more likely to agree with statements like “a nice car is more important than school” or that “designer labels make a difference” due to advertisements promoting a similar message around their high schools. Researchers have found that students are more likely to believe that such products are good for them, simply because they are advertised within school grounds. This is due to the fact that kids have been socialized to trust whatever information is presented to them in a school setting. It’s unfortunate then, that companies promoting junk food and sugary drinks hold the top spots for advertising within schools. Especially in a country with an increasing obesity problem.

When it comes down to it, the main goal of an elementary education  isn’t about learning  multiplication tables. Or how to write cursive. It’s about learning life skills. It’s about learning how to become an active citizen of the world. By allowing advertisers into schools, we’re essentially turning this logic on its head. We’re allowing advertisers to turn children into objects, and into passive consumers stuck in a commercialized world. Shouldn’t schools have a right to practice what they preach? Shouldn’t students have at least one safe place, in which they can be protected from the corporatization of our highly commercialized world?