According to a recent report by the World Bank, 75 percent of the world’s poor do not have a bank account.  Use of formal banking, the system of official bank accounts set up within financial institutions, is pretty rare within the 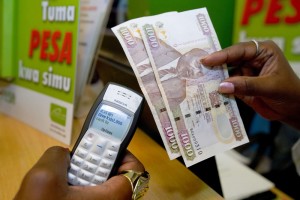 developing world, even for those who actually have the bank accounts. Ten percent of adults in the developing world who have formal accounts have no activity in their banking account; that is, they typically do not deposit or withdraw money each month. Only two percent of counterparts in the developed world report no such activity. This is because most people in developed, high-income countries regularly have banking activity thanks to ATM cards, debit cards, checks, and other forms of electronic payment.

A major innovation that is contributing to a change in financial banking activity is mobile banking and so-called mobile money. In Sub-Saharan Africa, 16 percent of adults have used a mobile phone to withdraw or receive money.  This is helping men and women overcome the barriers to traditional banks, like distance to a formal banking institution and lack of regular or significant income. Mobile money is an innovation that will have an impact on the financial sector and development of the Global South.

This infographic by the World Bank offers some great information about who is using mobile banking, and the

extent of other indicators of financial inclusion.  According to the infographic, 68 percent of Kenyans use mobile banking.  A common mobile banking system there is called M-PESA. (“Pesa” is the Swahili word for “money.”)  This service originated with the purpose of easy send-and-receive services for microfinance borrowers. In 2010, M-PESA partnered with Kenya’s Equity Bank to form a savings program called M-Kesho. “Kesho” is the Swahili word for “tomorrow.”

The impact on Kenyans seems to be pretty remarkable.  For example, rural Kenyans report as much as a 30 percent increase in incomes since using the M-PESA service.  Trends and patterns in savings have also changed, because M-PESA has become integrated into savings portfolios. Finally, women, especially those in rural areas have become more empowered, with easier access to money from a spouse or others. Andrew Mitchell, the UK International Development Secretary, has stated that mobile banking could present a way out of poverty.

Because Gross Domestic Product (GDP), a measure of goods and services in every country, is fueled by factors like consumption, savings, and taxes, mobile money is clearly a factor in economic growth and development.  A number of development issues, like education and health, are inherently linked to poverty. For example, poverty is associated with poor health outcomes.  This is because poor people often cannot afford essential medicines, trips to visit doctors for primary care, and other necessities. In addition, the poor are often unable to achieve high education rates. Many times this is because they must leave school in order to find a job and earn money, or because they cannot afford fees to go to school.  It seems obvious then, that increased GDP might fuel development in many sectors.

Mobile banking has the potential to increase financial inclusion for vulnerable populations, like women and other marginalized populations. As we have seen with partnerships like that between M-PESA and Kenya’s Equity Bank, the potential to save and spend on necessary items that promote health and human development is immense. With additional partnerships with NGOs and other development organizations, people around the world can begin to realize their own potential and improve their quality of life. This will decrease the number of people who are most vulnerable to economic downturns, and decrease the number of people who are susceptible to more extreme poverty. With governments acting as regulators, mobile technology providers continuing to innovate, and development organizations advocating to bring these services to the most needy, innovations like mobile banking will continue to influence levels of global development.