Last week, April 25th, was World Malaria Day.  This awareness day began in 2007 by the World Health Assembly. Malaria is an illness that does not seem to exist in the US or many other countries. However, the problem persists in many developing countries. This is where people are most vulnerable to malaria.

In 2010, more than 3 billion people were considered at-risk for malaria.  An estimated 216 million cases of malaria occur every year, and lead to an estimated 655,000 deaths. There are several countries within a few regions of the world where malaria is endemic.  Endemic means that it is regularly found in those areas.  These global regions include Sub-Saharan Africa, The Amazon rainforest in South America, Central America, the Caribbean, Southern and Eastern Asia, and the Middle East.

Malaria is a problem not only because of the devastating deaths it causes, but also for the economic impact. Some estimates find that malaria is responsible for a $12 billion dollar loss in the African continent alone. The illness also plays a major role in maternal and newborn health: 10,000 pregnant women and 200,000 babies die as a direct result of malaria during pregnancy. 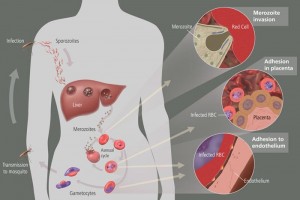 introduced into the blood stream. The parasite is normally hosted by a certain species of female mosquitos, known as Anopheles. The entrance into a person’s bloodstream occurs when a host mosquito bites them. Once introduced, the infectious material travels to a person’s liver and replicates rapidly for days, until finally, symptoms begin to show.

There are a wide range of preventative measures that can be taken. For example, people can be put on medication that treats the illness, the number of mosquitos can be controlled, spraying of anti-mosquito sprays, use of bed nets to prevent bites at night, when they are most common.

The use of bed nets has been shown to be extremely effective.  More specifically, when nets are treated with insecticide, they reduce the overall mortality of children under 5 by 20 percent.  The number of malaria infections has been reduced by 40 percent. Other effects, like low birth weight, have been reduced by 30 percent. The bed 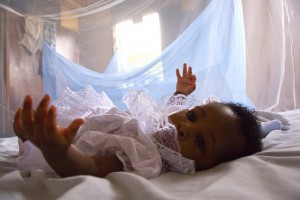 nets are effective because they provide a physical barrier for the mosquitos, so that people are not bitten.  In addition, because the nets are treated with insecticide, mosquitos can actually be killed by physical contact between them and the net.

In the World Health Organization’s 2008 Malaria Report, in Africa alone, the use of long-lasting insecticide treated nets  along with increased access to malaria drugs cut down deaths due to malaria by more than 50 percent.  This varied from country to country, though, and some countries saw more success than others. For example, in Rwanda, mortality was reduced by 66 percent and the number of new cases fell by 64 percent.  In Kenya, among children deaths due to malaria were reduced by 44 percent and the number of people using nets increased by ten times. These two success stories are among many others in the continent and around the world.

The World Health Organization has recommended that insecticide-treated nets, referred to also as long-lasting insecticide nets, be provided free of cost to all people who are at risk of malaria infection. If it is not possible to provide malaria nets for free, then the WHO recommends making them available at a highly subsidized rate.  Because women and children are among the most at-risk and also happen to be the least economically empowered in many countries, it is important that cost not be a factor in acquiring the nets.

In addition to providing the nets, it is important to stress the value of using them for prevention of malaria among people. Some have found that nets are sometimes not used for the intended purpose of protecting humans, but instead are used to protect livestock and other animals. For this reason, education and behavior change communication are also crucial to ensuring adequate and appropriate use of nets.  Education should also be provided to inform pregnant women of the importance of attending antenatal clinics, so that they can be monitored throughout the course of the pregnancy.

Although strategies still need to be perfected in some countries regarding how net distribution works, for example, being sold for a nominal price or being provided for free, or being distributed in a centralized manner or in a decentralized manner, the value of insecticide treated nets is recognized by major institutions.  With proper education about the value of nets, human productivity will increase and a major economic burden can be relieved off the shoulders of developing countries.