One out of every five students in the United States is enrolled in a rural school, and that number has showed a trend of growth in the past. The word “rural” in reference to education is typically defined as a school district with less than 600 students in total. To put this into perspective, my high school graduating class alone had over 700 students, and I lived in a relatively small suburb in Texas.

Just like urban areas in the US, rural areas suffer from concentrated poverty as well. Besides poverty, though, 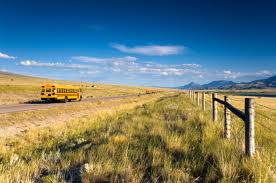 rural schools face a number of difficulties that keep them from progressing at the same rate as the rest of the nation’s schools. A major fallback that rural schools see is that they generally have trouble bringing in and keeping high level teachers. There are fewer resources and fewer opportunities for growth in rural areas, which does not typically draw in new talent. Another problem that persists is that rural school districts do not have the capacity or resources to create or maintain upper level, honors, or AP classes for their students. Due to this, many students leave rural schools and have a difficult time competing against urban students for college enrollment and jobs.

When the federal government attempts to make changes to schools and education across the country,it tends to overlook the specific needs of rural communities. In fact, funding that was created to assist schools with high levels of low income students often ends up going toward facilities with larger enrollment. Obviously, meeting the needs of as many students as possible should be a priority, but not at the cost of overlooking those in rural areas. In addition, competitive grants tend to be awarded to schools that can show how the funds will be used in large scale ways. On top of that, grant proposals are often sent in by principals in rural schools, whereas larger districts have the resources and funding necessary to employ a separate staff member who allots more time specifically to grant competitions. Again, I have to say that I understand why needs tend to be met at larger levels, but I also know that no student should be disadvantaged because of their location. How many brilliant minds might we be holding back due to the allocation of funds?

To ensure that every student in the United States has an equal opportunity to succeed, our government should reconsider the actions that they are currently taking to address these problems. Obviously funding needs to be re-analyzed. While there are laws in existence that are supposed to make sure that fund allocation is not an issue, the problem still persists. Some districts are receiving far less than their fair share of support. Rural schools should receive no less attention in this area than urban or suburban schools.

AmericanProgress.org suggested that the minimum state allocation of funds should be tied to the fixed costs of operating public schools. This would create fair and equal distribution of funds to urban, suburban, and rural schools. Additionally, “wraparound services,” which make nonacademic problems connected to school, should be offered in rural areas. For example, “full-service community schools” would provide health, dental, and extra curriculars, among others, to low income students who might otherwise not have access to any of these in a rural area.

By just taking these two steps, urban schools could benefit greatly. Obviously there is much more that needs to be done, but I know that taking on too much at once can potentially backfire.

If you have any ideas on bettering the future of rural schools, please share them in the comments section. Remember, students in rural areas have no less potential than those in urban areas, they just don’t have the benefit of receiving as much support.