Immigration in the U.S. is a very hot topic that often gets simplified to one word: poverty.  It can very well be that poverty is one of the key issues that has increased immigration trends to the U.S.  However, it is often too easy to compile all the structural and political problems into one big ball of underdevelopment.  One of the biggest issues, which I think is often over-looked at in analyzing the increasing waves of immigrants, especially from Latin American countries and the Caribbean is remittances.  The first time I heard this term, was not in a classroom setting.  In fact it was when my grandmother was talking to her friend about all the “remesas” (remittances in Spanish) that she was sending to her family.  That ‘s exactly what remittances are: money that immigrants in the U.S. send to their family and relatives.

Although it is a very simple concept, remittances can be thought as one of the greatest reasons why immigration continues to increase and why people pin point it on the “underdevelopment” of these countries.  Remittances are in fact a great help for Latin American and Caribbean countries…If it were reduced to a simple monetary transaction.  In theory, they are what keep these countries from further becoming impoverished.  I think that we should look beyond this theory that says that simply putting more money into the hands of poor people really does help them come out of poverty

In fact, in my perspective, remittances can hurt both the recipients and the immigrant worker in the long run.  Figures and numbers are helpful when understanding the amount of money that is sent from the U.S. to Latin 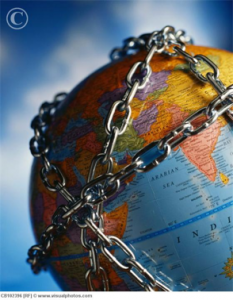 American, but it also emphasizes one word: dependency.  Dependency has to be one of the biggest destructive elements for these countries that are trying to improve their economy.

One of the countries that best exemplifies this is El Salvador.  El Salvador is one of the Latin American countries with the highest percent of migrants, which sharply increased during the country’s civil war (1979-1992).  Today, the effects of this can be seen in the value of remittances entering the country in U.S. dollars; in 2005, remittances added to 3,000 billion U.S. dollars.  In a macro perspective, some might be tempted to say that it is injecting money into the Salvadoran economy, but in reality it is only helping people to stay afloat while their standards of living remain at the margin of poverty.

We can talk about the GDP of the country, the percent of GDP that remittances represent and other factors that drives the country further into dependency.  But if we want to understand the effect of remittances on this country (and the U.S.), we need to look at how households behave in this environment of remittances.  I found a report prepared by the Organization of American States and after looking at the various charts, what most impacted me about remittances was the administration of the money.

So how do the majority of the recipient families handle their money in El Salvador?  It’s not shocking to see that the majority of the money goes to living expenses, while other areas like savings and investment goes to the back burner.  But what I think truly paints the picture of the dependency these remittances are creating is the percent of remittances that goes to education.

Families in El Salvador, the country with the highest average monthly amount sent by their immigrants, puts 4% of remittances toward education. Nearly 81% of remittances are spent on consumption items, which are mostly imported from the U.S.  The effects of war and immigration are too intricate to find an easy solution to this dependency issue.  However, if so many of these Salvadoran would manage their money more wisely, it could have a long lasting effect on their household and on their communities.  For example, education should be one of the priorities that money is invested in after taking out for the essentials.  Also, consuming national products can have a resounding effect when thinking about individual actions people can do to help their economies.  Lastly, I think that savings can be beneficial for so many Salvadorans that do want to return to their country; having something to come back to like a built house is something most immigrants long for. 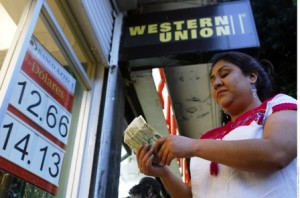 migrant family members, which can ultimately hurt them and the country they live in.  As more and more people migrate from their countries, the number of families dependent on money from them increases and the dependency of these countries toward countries like the U.S. becomes stronger.  The problem at the household level is the lack of information that people have about how these remittances really affects them.  Because of the economic situation that families are in, they only worry about day-to-day expenses and they forget about the importance of self-sustainability.  Because of this increasing phenomenon of remittances to Latin American countries, I think that there should be a time where the administration of money is discussed.  If people thought more about the long-term effects and implementing more money into education, it could create a cycle of increased education levels and better opportunities in these Latin American countries.  Remittances perhaps are a small part of the causes of immigration waves, but it certainly affects households directly everyday.