For many young people, listening to music while walking down the street has become a pretty common practice.  Thousands of students on college campuses, as well as high school and middle school students, can be seen bopping about to their iPods or mp3 players.  However, there is a major issue coming out of this new technological culture in which young people find themselves in devastating accidents because they were not paying attention to their surroundings.  The number of these accidents has slowly gotten higher as the years have gone by, but what exactly can be done to stop young people from listening to their tunes and walking about completely oblivious of cars and trucks?

In a recent case study, 116 people were studied in order to see how listening to headphones affected their interaction with their surroundings.  Approximately two-thirds of the pedestrians who were hit by cars were under the age of 30 but over the 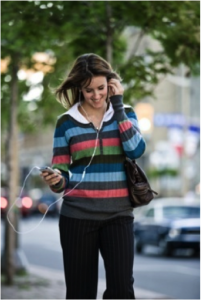 age of 18.  Though the age gap does not include high school and middle school students, it does include college students and does not account for the other one-third of accidents.  Many of those who were hit by cars or other moving vehicles reported that they did not hear horns signaling the cars moving towards them.  Others stated that they were simply not paying attention to traffic rules, and walked into oncoming traffic without realizing what they were doing.  Regardless of the specific reasoning behind why young people were involved in car accidents, the major issue was the fact that people were not paying attention to traffic because of their headphones.

The issue with young pedestrians listening to music and being oblivious to their environment is not a new phenomenon.  In fact, many of us have been told to never text while driving because it causes deadly accidents due to negligence.  In 2008, according to the National Highway Traffic Safety Administration, 5,870 people had died in texting accidents and over 1 million were severely injured.  Though hundreds of laws have been passed in many states to bring an end to texting while driving, it is still a major problem for young people because it is something that is still going on today.  I cannot tell of how many times I have been in a car with my friends and seen them texting away.  There may be laws to prevent texting in a car, but it is painfully obvious that these laws have not left a major impact on thousands of young people.

For that reason, it seems to be futile to create laws against pedestrians wearing headphones and listening to music while walking.  Laws have already been passed in places like Chicago, which has banned cyclists from using phones while biking.  New York City policy makers have also been entertaining the idea of banning pedestrians from listening to their iPods and mp3 players.  However, will a ban of iPods really work for the young population?  Despite the fact that listening to music while walking or running has resulted in numerous accidents, the laws will most likely backfire.  The reason behind this is the fact that many people who exercise and work out outdoors use music as a way to help them be active, and they will see the loss of their music as an infringement on personal rights.  Furthermore, some people may not want to go outside and exercise if they do not have music to distract them or get them into the mindset of working out.  Perhaps, to counter the effect of headphones resulting in accidents, the U.S. needs to invest in more pedestrian or bicycle lanes so that people are not walking into oncoming traffic.  Countries like the Netherlands in Europe have invested a great deal of money in segregated bicycle lanes in order to promote biking as well as making the roads safe for those who cycle.

Of course, the issue will then be for those who are not exercising and simply meandering down the street with their headphones.  In that regard, it will still difficult to monitor the thousands of people who listen to music on a daily basis.  Though it is important to come up with a solution to help pedestrians learn to be better focused on traffic, passing laws to ban headphones may not work.  Perhaps the fear of a law against headphone use will prompt young people to be more cautious.  Even then, technology continues to improve and adapt to society so perhaps a ban will not do much other than create a new sort of headpiece.