Yesterday I walked into one of my favorite restaurants, Chipotle. I usually order the exact same thing, a burrito bowl with chicken. However, this time I was in the mood for something new. I glanced up at the menu above the register to make my choice. As 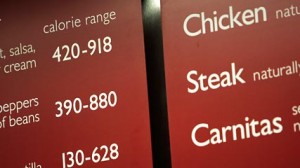 I panned across the menu I noticed what has become a familiar sight – all the menu items had calorie counts listed.  As a New Yorker, this did not seem strange at all. As of 2008, New York law requires that many restaurants (primarily chains) post on all menu boards, menus, and food tags the calories contained in each menu item.

However, this summer, as part of the new federal health reform act, calorie posting will be seen throughout the U.S. For all you health conscious “calorie counters,” the government is making your task a lot easier for you. For the rest of us… it’s another story. No longer will a person be able to walk into their favorite fast food restaurant and look up at the menu without being met with a rush of guilt as a result of the “1200 calories” marking next to their favorite food item.

As you might have guessed, the purpose of this new rule – tucked deep within the health reform – is to discourage people from eating high caloric meals. The government hopes that by informing the general public about the amount of calories in their food, the public will be discouraged from indulging in foods loaded with calories. As a result, obesity rates will be reduced and the general public will be healthier. Whether or not this will work still remains to be seen. I believe that this rule will be largely ineffective as far as our immediate future is concerned, but I am still in favor of it. I think that with the proper changes, the rule can be very valuable for helping people lead healthier lifestyles and can prove to be quite significant further down the line.

Keep in mind that New York has already implemented calorie postings. Multiple studies have shown that listing calorie counts has had little to no effect on New Yorkers’ food spending habits. One study compares a group of people from New Jersey to a group of people with similar socioeconomic status from New York that have access to calorie postings.  The study – like others – finds, more or less, no difference between the two groups’ eating habits. I believe that the reason behind the unchanged behavior is the result of a single, major issue plaguing our nation.

This issue is the lack of education on health issues in our nation. People will see and understand that the cheeseburger they are consuming contains 700 calories, but they 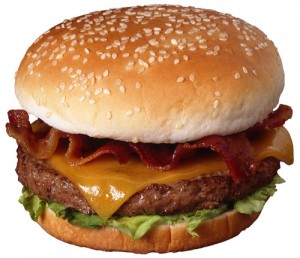 might have no idea what that means for their health. Providing information to people that lack full understanding of the information will prove to be a futile endeavor. As I mentioned in an earlier blog post, this nation needs to invest more in health education, through its public school systems. The government can post all the facts and figures it wants, but until the public understands what exactly those numbers mean, we will continue to see these sky-high obesity rates.

While I do not believe calorie postings will have an immediate effect, I am in support of them. One benefit of calorie postings is that it’s a step in the right direction. The posting of food calories alone – in my opinion – will do little to change our nation’s eating habits. However, if other actions are taken, such as increasing funding for health education in public schools, then posting calories will be a valuable and necessary component in the nation’s fight against obesity and poor eating habits. Once people do become educated on eating healthy, knowing the amount of calories in their food will be very helpful in making informed and healthy choices.

In short, calorie postings will do very little to reverse our obesity rates in the near future. However, with the proper education, calorie postings can become invaluable pieces of information for people making healthy dietary choices. This new rule will do no harm, and in the future it might be incredibly useful and beneficial. So, let’s embrace it, learn from it, and make the proper adjustments to our society’s approach to poor eating habits in order to make the most of it.