Last fall, I was having lunch with family friends during a stay in Fort Worth, Texas.  Per usual, we were discussing, family, friends, and our projects at work.  Our one friend began discussing her work for an energy company that was beginning to drill for natural gas.  As she explained the drilling process and her role in the project I listened politely, but it wasn’t until she revealed the project was taking place in Somerset County, PA did I really start to listen.  My interest was perked because Somerset County and western Pennsylvania in general is were my entire extended family lives.  The topic of drilling, which I had previously paid little attention to, suddenly hit close to home, literally. 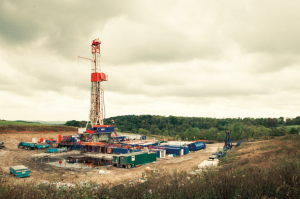 companies from across the nation, including Texas, are now looking to the former steel land for their huge drilling projects.  The Marcellus Shale has lain beneath almost half of Pennsylvania for centuries, but in recent years 52 operators and 1,608 wells have taken claim to the northeast to southwest regions of the state.  An industry funded study conducted at Penn State University projected that the Marcellus Shale Formation could generate $20 billion for the state by 2020.

The emergence of these drilling sights has not occurred without significant press-back and disapproval from environmental activist groups.  Individual municipalities and boroughs have hosted numerous town meetings to discuss and protest the presence of drilling in their town.  Larger scale movements, including significant investigations from the Environmental Protection Agency, have also voiced meaningful concerns.  The complaints of these various groups largely revolve around the danger natural gas drilling poses to drinking water and air quality.  The pollution is caused by hydraulic fracturing which is a technology that releases gas trapped in shale rock by injecting sand, water, and chemicals thousands of feet below the Earth’s surface.  Residents of particular counties have complained about methane and chemicals in their drinking water.

Until February 14th, Pennsylvania was the only state that did not tax natural gas drilling companies.  Growing pressure from individual towns and activist groups influenced the PA state government to seriously consider and ultimately pass the tax on energy companies.  The bill passed through the state congressional process and was just signed by Governor Tom Corbett.  The law will impose an impact fee on drilling companies.   Local municipalities have the choice of whether to enact the impact fee on the specific drill sites within their area.  If they would approve the tax, the impact fee the municipalities themselves would receive is 60% of the tax collected by the state government.  In this way, the municipalities being most affected by the drilling would have funds at their discretion to potentially apply to environmental or clean-up projects.

Although this tax does affect drilling companies in a negative way, the PA tax is the last of its kind to be applied to drilling companies in any state.  Nearly three years of untaxed drilling occurred in the state.  With the tax, municipalities will receive some of the fee, but individual areas will still lack control over which company drills, when they drill, and where they drill (energy companies are allowed to establish sites in residential areas).  Lacking political power to stop drilling companies, local governments and communities fall at the will of the state, who sees the Marcellus Shale as a huge market for statewide economic growth.

Although my curiosity and concern was particularly sparked because of the nearness to home, these same issues can be relevant to people across the country.  In reality, our community and our local governments can at times lack the control over things that affect our every day life and health.  The families in PA are potentially being exposed to harmful chemicals from this drilling project, but they lack the political power to end the drilling.  This is often a trend in environmental pollution issues, where those making the policies are not those being affected by the negative results.  The solution is continued education and advocacy, because, as seen with the “impact fee”, small steps can be made to reduce the negative environmental externalities of economically positive projects.