Weblebrities are the new thing. They’re created when online fundraising campaigns use celebrities to enhance their image and monetary intake.  Weblebrity: a celebrity on the web. You might have seen something like this before, notably in a campaign called NoH8, which was created in 2008 to fight Proposition 8 in California. For a 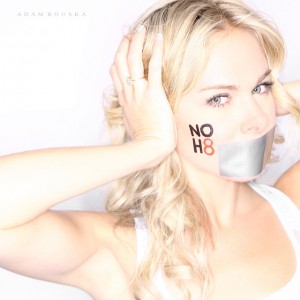 while Facebook was covered with pictures of celebrities with duct tape covering their mouths and “NoH8” (No hate) written on their faces. You might remember seeing pictures of the Kardashian sisters or Steve-o from Jackass, for example.

Ashton Kutcher and Kanye West are a couple of other celebrities you might remember noticing online at some point. By simply keeping an eye open or searching the web a little, it’s easy to see that countless celebrities take part in social media fundraising campaigns all the time.

What I am here to question is whether or not these organizations are really benefiting from celebrity presence. I’m not suggesting that their efforts are wasted, but could nonprofits and campaigns possibly be taking more strategic approaches, in turn seeing increases in funding?

Last year Lady Gaga and Justin Bieber helped out at an event that raised $100,000 to go toward helping children in Africa. At first glance, this seems like a great feat. However, when considering the fact that the two celebrities have millions of online fans and followers, researchers found that Gaga and Bieber actually rose well under a penny per fan that they have. Moreover, Kanye West, as mentioned above, actually raised zero dollars in a campaign he recently took part in.

The online payment website, PayPal, decided to do a study to figure out how beneficial celebrities actually are in campaigns. The results were pretty interesting. What they found was that using lesser or unknown people that had personal ties to the cause they were raising for saw much better results than using a celebrity whom had no association with the issue at hand. For example, Ashton Kutcher attempted to raise money for a children’s hospital, but did not fare nearly as well as a young boy who was actually treated at the hospital he was raising money for. People want to see connections to the causes they are donating to; they want to know that their support is going into the right hands.

Who would you rather donate to- a celebrity who sings or raps about having careless sex with countless women, but claims to support breast cancer research, or a father and three children who lost their wife and mother to breast cancer and are now raising money to prevent the tragedy from happening to another family? The choice seems pretty clear to me.

Organizations and campaigns should seriously start considering and re-evaluating their approaches to fundraising. Whether the campaign is for gay rights, women’s rights, education, or protecting the environment, nonprofits should focus on connecting with the public on a personal level rather than simply throwing someone famous at them. The NoH8 campaign used numerous celebrities to gain popularity, but if I had my guess, you probably wouldn’t be able to name ten or even five of the famous faces within the campaign. What you might be able to remember are true, touching stories told by real people.

My hope is that campaign leaders realize the solid facts surrounding this topic and pursue more advantageous routes in the future. Why try to gain publicity by siding with fame when organizations could achieve more support, financially and emotionally, by joining those whom are truly dedicated to the cause? Celebrities are generally in the business to strengthen their image, while those with personal connections to issues simply wish to contribute to what really matters. By resisting the urge to jump on the bandwagon and using regular, everyday people to tackle fundraising instead, I think that organizations would greatly benefit in their campaigning efforts.