What Kind of “Change” Are Companies Really Trying to Make?

Imagine today you woke up and decided, “I’m going to start a business.”  Whether you have an MBA or half a year of college under your belt, there are certain steps you realize you’ll need to take to see your vision come to life.  First, you’ll need a business proposal, a financial plan, investors, permits and licensing, a location, employees, tax registration, a name, and, oh, did I mention a humanitarian aid organization you’d like to partner with.  There is a new age of entrepreneurship arising in the twenty-first century.  Start-up companies can no longer cut it with cool designs or catchy advertising.  A huge market has emerged for businesses that can prove to their customers that priorities are shifting, offering room for goodwill in a business world where profit is typically the number one value.  But, is the business model really changing? Or has the concept of corporate social responsibility and the effectiveness of donation based promotions just trickled down to the small and medium sized enterprise sector; in essence, keeping profitability the peak priority?

To explore this question we should probably first take a hard look at ourselves.  As consumers, do we really know why we chose the products we chose? If presented with two similar products with identical value, which do we chose?  Studies are releasing information about the psychology of our decisions.  When offered two products, one with a monetary discount and one with a promise of donation to a charitable organization, we chose charity.  This isn’t necessarily because we’re selfless; on the contrary, we actually receive an additional psychological benefit from the product other than its face value when we buy into the donation promotion.  We receive the value of the product and the value of feeling good about ourselves.  Research shows that when we receive two separate and distinct benefits from a product we are more likely to purchase it1.  80% of people say they would switch to a brand that supports a cause rather than offers a discount if it is of equal price and quality2!

Producers have tapped into this psychologically driven purchasing decision for the last two decades.  While in 1990 the annual amount of money used for donation-based promotion was $100 million, in 2009 this annual number rose to $1.5 billion.  Corporate social responsibility is no longer being employed as a short-term image-boost.  Instead companies are tying in partnerships with non-profits and charitable organizations to their long-term business strategies3.

Large corporate organizations are known to offer charitable donations and services.  A significant amount of controversy surrounds the charitable actions of these companies.  As we can now understand, promises of charitable donations to customers provide a huge competitive advantage over other companies, begging the question, do these companies really stand behind their causes or is their main concern still financial gains?  Additionally, corporations’ target certain regions to receive the benefits of their donations.  The social benefits these regions receive from the corporations’ partner non-profits tend to aim at building the community economically.  This presents an ethical dilemma such that these corporations are priming growing markets for future sale of their own products.  It seems difficult (at least for me) to imagine a truly altruistic mega-corporation, and it seems hard to look past their need to be competitive in massive markets.  But I wonder what happens when the model of donation based promotions is applied in the realm of small, start-up businesses.  Can the businesses belonging to the new movement of philanthropy truly back-up their commitment to charity?

The most recognizable company in this movement is TOMS.  TOMS is a shoe (and now 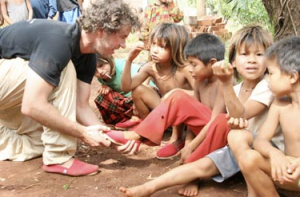 sunglass) producing company that has created a model of giving which is gradually being mimicked across the U.S.  With the motto “one for one”, TOMS takes the donation promotion model to an extreme by promising that for every pair of shoes it sells, one pair will be donated to a person in need. Another new company using this model is Warby Parker.  They offer affordable prescription glasses by cutting out the middlemen, and they have adopted a version of “one for one” called “buy a pair, give a pair”.  Warby Parker donates one pair of prescription glasses for every pair bought.

TOMS and Warby Parker partner with well-renowned non-profits and NGOs, such as IMA World Health and VisionSpring to implement their giving mission abroad.  Having this one-on-one partnership provides a level of credibility to their missions, and makes it convincing to consumers that their promised donations are being utilized in a trustworthy way.  This new wave of smaller-scale, one-for-one business model might be a way to prove the authenticity of the starters’ philanthropic goals when faced with the same criticism of large corporations.

However, these companies’ commitment to charity should not be taken at face-value.  The concept of one-for-one generates new controversy when analyzing this models actual effectiveness in improving impoverished communities. One way to understand these issues is by looking at studies that provide convincing arguments against in-kind donations.   Especially in Africa, studies by researcher Garth Frazer show that used-clothing imports reduce local production by 40% and employment by 50%.  Similar arguments have been made strongly opposing in-kind donations in Haiti after the earthquake as it detracted from local producers’ market.

When discussing the new wave of donation-based companies some questions do arise.  We can be hopeful that the philanthropic intentions of these small business starters are pure and that they are not simply seeking to maximize profit by buying into the psychological vulnerabilities of consumers; however, we cannot be naïve.  As consumers we need to question if these companies are truly willing to sacrifice financially sensible decisions in favor of social benefits, and if the mission they are promoting is actually bringing about real change in peoples’ lives.

References
1 Strahilevitz, Michal and John G. Myers.  “Donations to Charity as Purchase Incentives: How Well They Work May Depend on What You Are Trying to Sell.” Journal of Consumer Research, Vol. 24, No. 4 (March 1998), pp. 434-446.
2 “Warm glow or cold, hard cash? Social identity effects on consumer choice for donation versus discount promotion.” Journal of Marketing Research. Vol. XLVIII (Oct 2011), pp. 855-868.
3 Jenkins, Heledd, “Small Business Champions for Corporate Social Responsibility.” Journal of Business Ethics, Vol. 67, No. 3 (Sep 2006), pp. 241-256.
Tracey Shipman is a senior at the George Washington University studying public policy, economics, and peace studies.   As a Program and Research Intern for the SISGI Group, she researches environmental sustainability, education, and economic development.