What Kind of “Change” Are Companies Really Trying to Make?

Two weeks ago I wrote about a burgeoning responsible tourism initiative in Egypt’s Sinai Peninsula and how it could benefit the Bedouin community and Egypt as a whole.  Today, while I was on the elliptical (which I do about once every month or so… I like to stay healthy.) I happened to flip to CNN just in time to catch a much more disheartening story on Egypt: the soccer riots. You can watch the exact clip I saw here at CNN.com.  If you haven’t heard about the riots already and don’t want to watch the clip, let me bring you up to speed.

On Wednesday evening (Egypt is 7 hours ahead of Eastern time, for reference) there was a soccer match between Port Said’s Al-Masry team and Cairo’s Al-Ahly team at a stadium in Port Said.  Tensions were high throughout the game, with Al-Masry fans throwing bottles and rocks at players, and after Port Said won 3-1 a riot broke out in 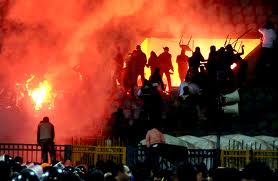 the stands.  73 people died and hundreds were injured as fans bashed each other with rocks and chairs, and many people fell to their deaths from the bleachers.  Police refused to open the gates to the stadium, trapping Al-Ahly fans inside, and there was no security to stop the destruction.

It is possible that this was simply a soccer riot that got out of hand—I’m sure we’ve all heard news coverage of similarly violent soccer riots—but many believe (myself included) that this is something more to the story.  This is the most serious act of violence not directly linked to the revolt since the beginning of the Arab Spring, and so presents a challenge to the interim government.  The government will hold an emergency session in Parliament on Thursday to discuss the incident, showing that they realize this was more than just an over-zealous group of rioters who went too far.

This incident highlights the deteriorating security situation in Egypt, which just last year was run as a police state.  If the interim government cannot respond quickly and decisively to this event and get control over the security of the country it is possible 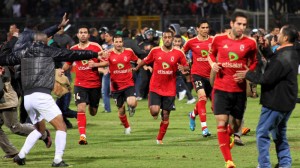 that Egypt will descend once again into chaos.  Al-Ahly fans have already vowed revenge against the Al-Masry fans who started the violence, asking why a winning team would attack and kill others and swearing not to let it go.  Hundreds of angry fans have already gathered outside the Al-Ahly club’s headquarters, with protesters chanting “Down with military rule; leave it to civilian rule.”  Clearly, this situation could escalate quickly if the government does not do something to fill the security vacuum.  If this is a referendum of sorts against the interim government, however, then increasing security would do little to appease the angry fans.

Soccer fans were, after all, major players during the revolution.  Protesters turned to young soccer fans to help them organize demonstrations, since the fans had experience with unruly mobs and police, and soccer fans have had leading roles in many protests.  When Mubarak was being tried soccer fans stood outside the courthouse and shouted slogans against the security agencies, warning of a “new revolution.”   So hopefully you can see how this riot could tip the scales and cause conditions to deteriorate, since soccer fans were some of the main players during the revolution and may have very strong feelings about the government and the security agencies.  We’ll have to wait for more information, though, before any serious predictions can be made.  It’s still unclear whether politics fueled the clashes and whether there was a Mubarak element.  All we know now is that there is a lot of unrest, a lot of anger, and hundreds of wounded and killed citizens.