Have you ever seen the MTV show Skins?  Wait, it’s okay, I won’t subject you to the embarrassment of admitting to it; I’ll fill you in.  The show (a replica of a British hit) fictionally illustrates the lives of a group of American teenagers.  These teenagers participate in pretty much every morally questionable activity imaginable before the age of eighteen.  Naturally there has been significant outcry for the way the show threatens the Reagan-esque image of the American family, especially with the seemingly glorified depiction of substance abuse and sexual activities at deplorably young ages.  And while in America there exists significant consequences to teens’ poor decisions, could these consequences be even greater in another context, when even more is on-the line than white-picket fences?

Considering these consequences now forty-five hundred miles away in Brazil, we might see how teenage behavior has the capacity to undermine arguably the largest and most successful social program in the world. 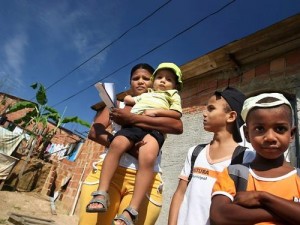 inequality measures and has consistently had a Gini Coefficient at least one tenth higher than any other BRIC (Brazil, Russia, India, China) nation. In recent years, Brazil has begun to tackle this issue with an innovative use of conditional cash transfers through its Bolsa Familia Program. This program addresses how intergenerational lack of access to health and education can lead to a poverty trap, and offers a solution by providing family grants to female heads of households for children’s school attendance and vaccinations. The University Fundaçao Getulio Vargas (FGV) conducts studies tracking the success of Bolsa Familia.  They report that Brazil’s Gini Coefficient has fallen from .58 to .53 and that the percentage of Brazilian households living on less than 800 reais ($440) a month has fallen by 8% yearly since 2003.

Contributing one sixth to total inequality reduction, Bolsa Familia has become a crucial program in Brazil’s development strategy.  With its ability to keep budgeting manageable (Bolsa Familia only costs the Brazilian government .5% of annual GDP and only 22 reais ($12) per month to most families involved with the program), Bolsa Familia has become a model social program that not only tackles short term poverty alleviations but also invests in human capital, one of the most important steps developing countries can prioritize to expand their economy.

The success of Brazil’s program has not been overlooked.  A copy itself of the first conditional cash transfer program (Mexico’s Progresa Program), Bolsa Familia has been replicated in almost 20 other countries including South Africa, Chile, and Indonesia, placing it as a worldwide example of the power of investment in social programs and implementation of smart public policy.   This developing country’s ingenuity has even influenced social programs in the United States, the key example being New York City’s  “Opportunity NYC”.

Despite Bolsa Familia’s undoubted success at reducing poverty and increasing school attendance, the program faces new social threats that could disrupt the impressively smooth implementation of Brazil’s largest social program.  Brazil’s government plans to expand the program to include more families, but it fails to look thoroughly enough at the new social issues that might serve as an obstacle to the program’s growth.

Although coverage is spreading, questions need to be raised about those youth already benefiting from the program: what happens to the children that benefit from the program after their schooling years are finished?  What is to be done to address teenage pregnancy and the ineligibility of third generation children from obtaining benefits?  How can the spiral into drug abuse be curbed after the incentive to attend school is no longer applicable?  Currently, the program succeeds greatly in increasing investment in human capital and closing the inequality gap, but if the program is truly going to live up to its mission as an intergenerational solution, the new social issues affecting Brazilian teenagers face must be addressed.

The increase in teenage pregnancy and drug abuse and their interconnectedness has become a significant new social dilemma the Brazilian government should be considering.  The use of drugs causes youth to drop out of school or fail to obtain work after completion.  Teenage pregnancy creates a dependence on the maternal grandmother’s household, leading to financial pressures and possibly reversing the positive progress of condition cash transfers.  Additionally, as both mother and child are under the age of 18, only one is eligible to receive benefits if they remain in the grandmother’s household.  This policy discourages young mothers from finishing schooling and perpetuates the cycle of intergenerational poverty.

Before Brazil continues to expand coverage of the Bolsa Familia Program, it should begin to focus attention on other social issues that could hamper the progress of their exemplary program.  Much of the increase in undesirable teenage behavior is attributed to exposure to mass media, violence in families, and lack of self-esteem.  Although health programs addressing healthy lifestyles and safe sex practices exist, studies find they fail to reach the appropriate audience.  The option for cities to top-up the family grant under Bolsa Familia, such as with the Bolsa Carioca plan in Rio de Janeiro, could allow city-by-city conditions that target areas such as sexual education courses or extracurricular activities that offer constructive outlets for teenagers after school.   Additionally, scholarship programs to benefit poor teenagers after their primary schooling is complete could offer incentives for youth the chose safe and healthy lifestyles.

Although criticisms of Western TV shows and accolades for innovative development strategies might seem worlds apart, when the core issues merge, a serious threat rises to the forefront.  With all eyes on them, Brazil should begin to recognize the new social dimensions among youth that pose a serious risk to the long-term intergenerational success of the Bolsa Familia Program.

Tracey Shipman is a Program and Research Intern for the SISGI Group focused on Education, Economic Development, and Environmental Sustainability. She aims to illustrates through her research how education is the key to economic growth and a more equal and sustainable world.