New York City may be adding a new higher education facility in its midst fairly soon.  Mayor Michael R. Bloomberg recently decided that the City of Lights needs a top of the line applied sciences school.  The mayor has taken a great interest in the idea of a new academic institution, much to the chagrin of many universities, and has gone as far as saying that NYC lacks an esteemed engineering university like MIT and CIT.  Countless of universities from the United States, like Stanford and Cornell, as well as institutions abroad have expressed an interest in providing the major and city a proposal of a new innovative applied sciences university.  Though it seems as though Mayor Bloomberg is using the academic world as a stepping stone towards revitalizing his position as mayor, it is fascinating to see what will come out of this new change.

The mayor announced in October that the City had received seven proposal ideas for the Applied Science NYC initiative.  First, the program asked businesses, community 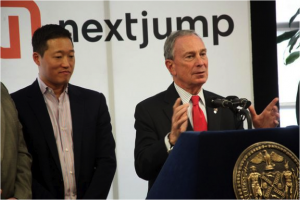 leaders, and academics what the city needed in order to help boost the local economy.  The answer that came up was that NYC needed scientists and engineers, and for that reason Applied Sciences NYC decided to extend a challenge to top universities in the United States and abroad.  Universities must come up with a proposal that outlines the beginnings of a new and innovative applied science and engineering school.  The winning proposal will be provided with land, up to $100 million worth of contributions, and full support from City administration.  According to city officials, the new school will provide an economic boost of up to $6 billion and make up to 30,000 new permanent and temporary jobs.

However, there are people who have expressed their criticism in regards to Mayor Bloomberg’s new school plans.  Since New York City will be providing millions of dollars worth of funds from its own capital budget, critics believe this is a terrible move to make during the current economic crisis.  Instead, critics believe that Mayor Bloomberg should be directing City funds to programs that are already in existence, so that they can be enhanced and made better.  Many NYC universities have been angered by the fact that Mayor Bloomberg stated the Big Apple lacks a top tier applied sciences and engineering program.  Despite the fact that it is true NYC does not have an engineering school like MIT or CIT, current universities feel offended by the mayor’s remarks.

Nevertheless, it is extremely interesting to see how a new applied sciences and engineering university will affect the NYC area.  There is definitely a glaring issue with the mayor’s remarks because both Cornell and Columbia have excellent engineering programs.  Schools like MIT and CIT are technological schools that focus on producing engineers and scientists, but by no means can local NYC universities be considered as poor engineering substitutes.  Furthermore, there is no guarantee that the new applied sciences and engineering school will be an academic success, and will be ranked in the midst of the MITs and CITs of the world.  If that is the case, then NYC may be unable to get back the money it will fund and invest in the school because the school would have then failed to get the economy revved up again.

However, investing in infrastructure, research, and education has always been a way to get an area’s economy moving again.  There is no need to begin construction of a new university thinking the worst and expecting horrific results.  Instead, it is nice to know that the United States is still thinking about students who want to pursue degrees in the science, technology, engineering, and mathematics fields, especially since the U.S. has been falling behind in these fields.  Investing in education is always a promising way of helping secure the future of thousands of children, but it also is a way to help boost the economy.  Though it is yet to be seen how a new applied sciences and engineering university will affect NYC, it will be fascinating to see how the end product is accomplished.