It is relatively simple to describe the life of an individual who falls into the “waiting” generation category.  Members of this new generation are recent college graduates, hard-working former students looking for jobs in their respective fields, and coming to the stark realization that they will not land a job coming out of school.  Some of these graduates are panicking because they have college debts to pay, and others, who may be of a more laid-back nature, are trying to roll with the punches.  However, the common thread connecting a vast majority of recent college graduates is the fact that they are waiting for jobs; they are in an economic limbo.

Though it is easy to advise recent college graduates, who fall into the above described category, to wait until the economy has a turn around, the effects of a jobless youth sector is quite alarming.  The unemployment rate for youth between the ages of 16 and 24, including those with only high school diplomas, is 18.9 percent.  Such a high unemployment rate for American youth means that young people are extremely discouraged with the lack of jobs in the occupational fields they had focused on for four or more years in college.  Since job hunting has become difficult, many post-college graduates are looking for any job that pays the bills and puts food on the table, but such jobs are not necessarily careers.  According to the Heldrich Survey, the number of 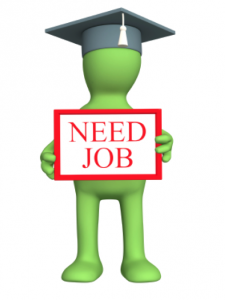 college graduates who have depicted their first post-school jobs as careers has fallen more than 30 percent from 2008 onwards.  Unfortunately, even second and third job positions were described as lackluster and not stable career fields like medicine, law, education, etc.  Instead of securing and advancing career jobs, recent graduates have been jumping from job to job in the hopes of landing something better.

Chief economists across the United States have explained that recent college graduates with bachelor’s degrees or higher make up approximately 30 percent of the labor sector.  The high unemployment rate has caused college graduates to either give up looking for jobs or wait around for the economy to get better, which in turn has caused graduates to fall out of the labor pool.  The shrinking of the labor sector signifies that college graduates are either going back to school for further education, giving up on hunting for a job, or looking for jobs that do not necessarily require a college degree; like waitressing, bartending, babysitting, etc.  Unfortunately, lower income jobs already have their own core sector of workers who need such jobs to survive.  As college graduates, who are unable to find jobs in their field, trickle into lower income jobs, they take away positions and opportunities for others who are already in that job field. Ultimately, college graduates as well as individuals with only high school diplomas, suffer from a high unemployment rate because of graduates leaving the labor pool to look for jobs elsewhere.
The statistics and information about recent college graduates is sad, dire, and in need of a major boost.  As the economy continues to remain in a state of disarray, those with expensive college degrees with dreams of secure futures, suffer in a post-education world.  If the economy does not manage to right itself, the waiting generation will evolve into millions of people who graduated from college, landed mediocre jobs, and get paid significantly lower than those who graduated in a healthier economy.  This, in turn, will cause a new group of people to emerge, a group of highly educated individuals who may not even make it into the middle-class stratum because they have no “career” based employment.  The frustration and unhappiness that can arise from such a situation can lead to a decrease in people entering bachelor’s programs because it seems almost useless to begin a four year education without a guarantee of success at the end of the road.  For that reason, it is important to transform the waiting generation into a generation of graduates who, after a short wait, do reap the benefits of getting a college education.