I recently read an article about a mother, Raquel, that had
been sentenced to prison for the death of her child, after a car hit her son (who
consequently died) as he crossed the street. The mother was sentenced in spite
of the fact that the driver who ran over them was drunk.

An accident like this involves more than what it seems. It
is not only about  what has been classified as  irresponsible parenting or about a drunk driver. It is a consequence of bad transit services and bad urban design. I think it is
unfair to blame a mother of killing her son when the streets are designed in a
way that inevitably puts pedestrians at risk. Near Raquel’s home, there
are no clear walkways or bridges that allow pedestrians to cross the street
under safe conditions (see video from PBS).

of the unsafe roads and walkways. This is an astounding number indicating that policies should change in order to diminish it. Having safe transportation would protect the lives of many people and is a safety and equity issue.

Raquel’s case illustrates this because it is the sole consequence of bad transit
services. But why is it important to campaign for good transit service even
if we are not a transit user?

First of all, the environmental impact would decrease. Using
and promoting public transit is important because it will help reduce greenhouse
gas emissions. Public transportation is the most effective and cheap way to
transport people around cities and around the country. Comparing transit to
other “green” alternatives (such as the electric car), and improving the transit
system is the best way to reduce emissions. For example, the environmental
impact of the residents of New York City is inferior to that of the residents
of Los Angeles or Atlanta because most of them use the MTA’s services.  Transit improvement should be a central policy to any city that wishes to decrease its carbon footprint. Moreover, as car use becomes more expensive (oil prices rising for example), many people will have to look for other methods of transportation. If public transit is well designed (safe and accessible), more and more users will be able to save money by becoming transit riders. This will be beneficial not only for the environment, but also for our pockets.

On the other hand, increasing the use of public transit would also decrease traffic. With more bus riders, there are less cars on the road and the roads are less crowded. This is the case in Mexico City, where people complain about the serious traffic problems. The 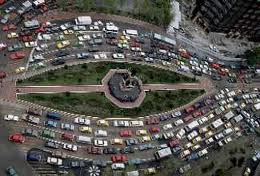 problem largely exists because there are too many cars on the roads. Everyone complains about the traffic, but few people are willing to become a transit user because the transit system is over-crowded as well. Even though the government has been building many new roads (it has even built a 2-level highway), the traffic is still very significant. I think that the long term solution would be to improve the subway (create more stations so that it reaches more neighborhoods) and the bus routes (create special bus lanes). Of course, improving public transit won’t be of any use unless more people start using transit. Therefore, it is also necessary that public transportation is actively promoted by the government.

Additionally, I think that using public transportation is beneficial to everyone because it allows us to use our time in smarter and more productive ways. We spend too much time commuting and driving (particularly in developing countries were fast urban growth has increased traffic so much). On the bus, train, or subway, we are able to read, write or make phone calls which we cannot do when driving. Finally, using public transit is also a good workout for the body and good for the health. Walking to the bus station or walking up and down the stairs of the subway would be very beneficial for those with a somewhat sedentary lifestyle.

A good transportation grid should assure the safety and improve the standard of living of all citizens. Transit use is not the main method of transportation in the United States. Nevertheless, policy makers should be bold enough to start designing and planning a new transportation grid that improves and promotes transit. Until the public transportation grid is improved significantly in many cities around the globe, there will still be the same amount of car riders and therefore pedestrians may continue to face dangerous roadways.

Julia Naime is a research intern at the SISGI Group. She
is a student at New York University. During her internship, she will focus on
Rural development, International Economics and Environmental Policies.