Since Mubarak stepped down as president of Egypt, some of the bloggers and activists who devoted their online time to organizing revolution have turned to a new use for social media: economic aid.  20 prominent Egyptian bloggers—the same ones who previously blogged about overthrowing Mubarak—have joined together to create a Twitter fundraising campaign, Tweetback.  The goal of the program is to raise money to help Egyptian slum-dwellers, and so far it has been quite successful.

Egyptian slums are home to hundreds of thousands of people—possibly even millions— and the living conditions are poor and often unsafe.  As in slums everywhere, the buildings are precarious and overcrowded and the residents lack access to basic 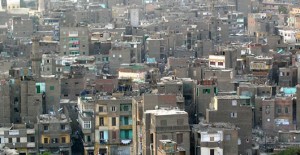 necessities like clean water.  In 2009 the Egyptian government attempted to help the slum residents by relocating people from some of the more dangerous slums, the ones built under or on crumbling cliff-edges, to nicer dwellings on the outskirts of Cairo.  While a good plan in theory, in execution the relocation proved troublesome.  The relocated families did have safer and nice living quarters, but unfortunately the new buildings were in the desert far away from the city center, leaving the new residents few job opportunities.  Some residents, mainly the fishermen, commute daily from the new apartments to the city, but lose much of their small income to transportation costs.  Others joined together to rent communal rooms in the city and visit their families only on weekends.  And many people still living in the city slums fear and resist being relocated, as they worry about being cut off from their source of income and insist that the government cannot move them out to the desert.

That is where the Tweetback initiative comes in.  Rather than working to relocate slum-dwellers, the members of the Tweetback initiative are raising money to improve the road network there.  The slums typically do not have paved roads, and they are often full of sewage and dirt and are extremely unsafe.  Because the roads are of such poor quality, ambulances and fire trucks cannot reach most of the slums, parents are afraid to send their children to school, and many people could not get to work.  So, the Tweetback founders hope that by improving the roads they will not only improve education and health, but reduce poverty.

The format of initiative itself is fairly simple.  Major multinational corporations like Coca-Cola and Mobinil are asked to donate to specific NGOs and development projects, and in return they are mentioned in tweets by the 20 Tweetback members.  It’s a win-win for both sides: the Tweetback founders have about a quarter of a million followers, collectively, so donors receive a lot of publicity, and the Tweetback initiative gets the money they need.  Tweetback hoped to raise $336,700, and in the first 10 days of operation raised $218,855—not a bad start!

Not everyone is enthusiastic about Tweetback, however.  The donations, while useful, are ultimately not sustainable, and some have argued that the very idea of using social media to raise money runs counter to the revolution, which was about empowering the people.  Further, some criticize the very idea of having corporations provide the donations, fearing that any charity work done is more about improving public image than genuine philanthropy.  The founders of Tweetback counter that they hope to make the donations sustainable by creating a phone line that will allow individuals and corporations to donate, and that many of the corporations who have already donated asked to remain anonymous.

So what do you think?  Will the Tweetback initiative prove to be sustainable, or will it flounder after a few months and leave people dependent on charity?  But I think either way we can all agree that building usable roads in the slums will go a long way in reducing poverty and improving access to healthcare and education.