On Tuesday, my colleague Ryan wrote the first installment of a blog series he and I are working on about the Dadaab Refugee Camp in Kenya. It is the largest refugee camp in the world, built to accommodate about 90,000 people. However, due to the current drought crisis in the Horn of Africa, there are currently almost 400,000 refugees staying in Dadaab – and that number is growing by the hundreds everyday. Unsurprisingly, this makes for an extremely overcrowded camp with very limited resources.

As Ryan mentioned, Dadaab is run by the United Nations High Commissioner for Refugees (UNHCR), which means that many U.N. agencies are also involved in the relief efforts. Donations are distributed among these partner agencies – like the U.N. World Food Program, for example – which are then able to supply emergency aid like food, 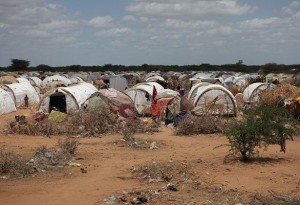 water, and medical supplies. The UNHCR itself is responsible for emergency assistance, like nutrition evaluation, sanitation, and protection. The problem? The U.N. hasn’t received nearly enough money to bring adequate aid and supplies to the refugees in Dadaab.

So far, the United States has provided over $450 million in aid and donations to help refugees in the Horn of Africa. Canada has provided over $70 million, and the U.K. has given almost $150 million – and these are just a few of the international governments that have stepped up and donated to the crisis. However, there are several wealthy European countries – such as Italy, Denmark, and France – who have failed to provide sufficient financial assistance. France, specifically, has pledged to donate but has failed to actually deliver the money. Germany was also criticized for only giving $5 million, which is only a fraction of what other rich nations have donated. They responded by giving an additional $7 million and more than doubling their total donation. Why has it taken so long for certain countries to respond to this crisis and donate? There have been warning signs of drought, famine, and a major food crisis for months – but these nations did not step up in time to prevent tens of thousands of lives from being lost, and they’re still slow to respond. Oxfam International even claims that these countries are guilty of willful neglect because they’ve failed to provide aid that they’re very capable of giving.

Though hundreds of millions of dollars is hardly chump change, it’s not enough. The U.N. has declared that a total of $1.6 billion is needed to overcome the drought, and Oxfam states that there is currently about an $800 million shortfall in funds. There simply isn’t enough money being given to the U.N. to distribute among its partner agencies so they can bring adequate relief to the hundreds of thousands of refugees in Dadaab. In the next two months alone, the U.N. is appealing for an additional $300 million for emergency relief. The governments who are capable of donating more money and resources urgently need to do so.

There are also many smaller NGOs working in the Horn of Africa and providing aid and assistance to refugees in Dadaab camp. Their services range from medical screening to providing malnourished children with fortified food. The International Rescue Committee (IRC), for example, is providing food and water assistance, giving medical treatment to refugees, and appealing for donations to emergency relief. However, many NGOs are struggling with the same problem that the U.N. is facing: there simply aren’t enough donations and resources being brought into Dadaab.

Despite the severity of the drought crisis, $1.6 billion may seem like quite a hefty request. Is all of that money going to food, water, and other emergency response supplies? Are funds being distributed efficiently and transparently? Could this be why some international governments have hesitated to donate money to the U.N. and smaller NGOs?

Let’s put this in perspective. More than 12 million people are affected by the drought, food prices have been rising sharply for months, and conditions in the Horn of Africa are not expected to improve until rainfall comes in October. Honestly, I think a $1 billion price tag sounds pretty reasonable to provide food, water, and medical supplies alone. As for the extra $600 million? There are many other expenses that have to be accounted for in the next few months, like sanitation, the expansion of Dadaab and other refugee camps, medical evaluations, and protection. When taking all of these needs for survival into account, along with the projected time period for accommodating the millions of people affected, $1.6 billion doesn’t sound so unreasonable. Also, let us not forget that even before the drought, poverty was widespread in the Horn of Africa. It’s not like refugees can simply travel back to their homes when the drought is over – they have virtually nothing left.

This brings me to the second major problem at Dadaab – the current system of international emergency aid and support is developed as a way to solely respond to crisis, rather than to implement sustainable ways for refugees to rebuild their lives. While emergency aid of food, water, and medical supplies are certainly needed for short term health and survival, it’s essential to enable refugees with the tools and resources to eventually leave the refugee camp. What about education and vocational training? What about providing communication with friends, family, and others who could help them in other parts of the world? What about providing counseling and mental health services to encourage and empower refugees to create a plan to rebuild their lives and the lives of their families?

The current situation at Dadaab Refugee Camp is not only dire, but also incredibly complex. There are no simple ways to provide emergency relief and sustainable assistance to hundreds of thousands of refugees. But stick around – Ryan and I are going to determine what’s working, what isn’t, what’s missing, and what we can learn from what’s happening at Dadaab for the future. Stay tuned!