Currently, the Eastern part of Africa is experiencing one of the worst droughts on record. More than ten million people are affected in countries such as Djibouti, 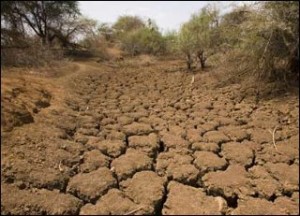 Ethiopia, Kenya, Somalia, and Uganda. With increasing food prices, dry land, failing crops and dying livestock, many Africans in these countries simply don’t have access to food. Malnutrition rates are skyrocketing, disease is spreading, and people don’t know where to turn for help. And with rain not expected until October, this situation is unfortunately going to continue to get worse before it gets better.

Forced to leave their homes and desperate for relief, hundreds of thousands are fleeing to refugee camps. Dadaab, which is located in Kenya, is the world’s largest refugee camp. It is built to accommodate about 90,000 people, but it is currently trying to house and serve more than 350,000 refugees – about four times the capacity. Not surprisingly, this has led to overcrowding and increasingly limited resources, which is something these individuals already understand far too well.

My first thought: where are the relief agencies? The U.N. has reportedly requested hundreds of millions of dollars in relief for Somalia, Kenya, and Djibouti, but only about half has been received by Somalia and Kenya, and about one-third by Djibouti. With increasing food prices and already limited resources, these refugee camps – which are basically a last chance for survival for hundreds of thousands of people – are going to run out of food, space, money, and medical supplies.

It’s not like the African continent is unfamiliar with droughts. Though in the past, they’ve typically occurred about once every decade. Recently, however, droughts have not only become more common, but also much more severe. The most likely culprit of these devastating droughts? Climate change. This drought is yet one more demonstration of how climate change is coming faster and stronger than the world can handle.

Unfortunately for East Africans, the already complex issue of climate change coupled with poverty and limited resources makes for an extremely difficult situation to resolve. The plan of attack must be multidimensional. First and foremost, food prices need to drop, relief agencies need to step it up, and there needs to be a plan for when the next drought strikes. The short-term problems of providing enough food and supplies to survive the drought must be addressed as soon as possible so living conditions, disease, and malnutrition don’t get worse. Additionally, the long-term challenges of climate change and creating sustainable ways to handle future droughts must be considered. Unfortunately, the assumption must be that droughts will continue, and that they will most likely become even more regular and severe. So the only way that African citizens will be able to survive upcoming droughts is to develop preparation strategies that will make living conditions bearable until the rain finally comes.

One possibility is to create man-made ponds throughout the region. During times of sufficient rain, water can be collected in these ponds, and it can be reserved for times of drought. Of course, they’d have to be numerous and widespread enough to be capable of distributing water to the entire region, but it’s certainly feasible with a group effort. Another option is to plant more crops that can survive droughts, like cassava. If all of the other crops die, a supply of drought-tolerant crops could be what ultimately saves a community.

One thing is clear: individuals in this region can no longer expect to only experience one drought per decade, and there needs to be a plan for long-term survival. The current strategy of fleeing to refugee camps is no longer enough, as space and resources are simply insufficient to accommodate hundreds of thousands of people. Individual countries, regions, and communities need to develop their own sustainable tactics that will enable them to survive future droughts without leaving their homes. And, of course, there needs to be new ideas for how to combat climate change so these devastating environmental tragedies can eventually stop.