In my post on Sudan’s wildlife, I briefly mentioned how countries that rely on Sudan’s oil reserves will continue to be among the country’s strongest supporters. I cited China as a key example of this, seeing as how 2/3rds of Sudan’s oil exports end up in China. So it was hardly a surprise when yesterday, Sudanese President Omar al-Bashir paid a visit to Chinese President Hu Jintao to sign a technological cooperation agreement that 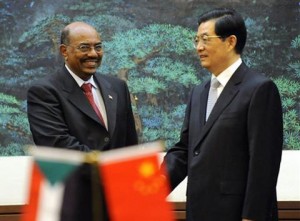 pledges support from China, including critical financial aid to both northern and southern Sudan.

This agreement sheds light on a variety of issues and raises a few questions. First, what is implied by technological cooperation? Most of the topics that President Jintao discussed in relation to this agreement were ambiguous, such as “deepening political links, boosting trade and economic cooperation, increasing exchanges and cooperating on international issues…” It’s hard to identify what any of that actually means when it isn’t accompanied by a tangible plan of action – which it wasn’t. The only concrete step outlined was China’s pledge to help build a bridge in eastern Sudan. Undoubtedly, large amounts of money will be funneled into Sudan as a result of this agreement. Much of this will likely end up in Khartoum, the capital, and consequently land in the hands of President Bashir and his government. But simply pumping money into Sudan creates very little chance of leaving a lasting impact. If it goes to President Bashir, who is to say he won’t use it to continue attacking southern border regions? Based off his track record, chances are that this is exactly what he will do.

Second, what does this agreement mean for China’s relations with Sudan once southern Sudan secedes on July 9th? President Jintao was careful to pledge Chinese support on both sides of the soon-to-be official border. Once again, however, this was done in a remarkably ambiguous manner. China is being careful to maintain diplomatic ties with the north while building a relationship with the oil-rich south. I wonder what President Bashir thinks of this move – I can’t imagine he’s thrilled. By endorsing a peaceful transition to the creation of southern Sudan while offering loosely defined technical assistance to Sudan proper, Jintao has masterfully bound Bashir’s hands whilst shaking them. Since Bashir and his government rely so heavily on aid from China, a key supporter, they are practically forced to accept whatever it is President Jintao offers them.

Lastly, what does this agreement say about the legitimacy of the International Criminal Court (ICC)? President Bashir has repeatedly been accused of crimes against humanity and genocide since the ICC began their investigation in Sudan in 2005, but these accusations have never led to formal arrest or conviction. Bashir ordered the slaughter of thousands of southern Sudanese during the country’s latest civil war, but China, unsurprisingly, doesn’t seem to mind. Jintao’s unconditional support for Sudan is a slap in the face of the ICC. China is not a member of this court and therefore sees no reason to honor its accusations. In spite of recent successes of the ICC, such as the role it played in justifying NATO actions against Colonel Qaddafi in Libya, China’s refusal to abide by its findings showcases the ICC’s inherent weakness. If major world players refuse to honor ICC accusations, perhaps there isn’t much of a point to making them in the first place.

In 10 days, southern Sudan will be its own country. It’s hard to tell exactly what the impact of China’s pledge of support will be when this happens, considering the ambiguity of the pledge. The timing of Bashir’s visit was no coincidence; he clearly wants Sudan proper to maintain close ties with the Chinese leader in spite of the fact that he is about to lose his main oil reserves when the south separates. As for south Sudan, Chinese funds could help jumpstart updates to a creaking infrastructure. But no one knows exactly how China will wield its immense influence in Sudan. Jintao is promoting peace in the south while renewing support to a war criminal that fights for the other side. The recent agreement gave clues on how he plans to use China’s influence, but it remains to be seen how this twisted plan will unfold.

If you’d like to learn more about Chinese influence in African countries such as Sudan, I strongly urge you to check out the webinar presentation of my fellow intern, Yvonne Chen, on July 12th. She will discuss the positive and negative impacts of foreign aid from China into countries such as Sudan. Hope to see you there!