Unless you’ve been living under a rock, chances are you’ve heard something about the ongoing situation in Libya. The violence there has escalated since the protests began on the 15th of February, and the international community has finally decided to get involved. On the 26th, the United Nations Security Council (UNSC) passed a resolution calling for an embargo on Libya. In that same resolution, the UNSC referred the problems in Libya to the International Criminal Court (ICC) to determine whether or not there was a case for individuals violating the human rights of the protestors.

A brief introduction to the ICC: The ICC became active in 2002 after the Rome Statute, 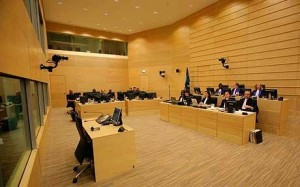 the treaty that created it, entered into force. Constituting one of the biggest changes in international law since the formation of the United Nations in 1945, the ICC allows for the criminal prosecution of individuals for genocide, crimes against humanity, and war crimes. Currently, there are only three ways that the ICC can prosecute: 1) The state that the individual in question is a citizen of must be a state party to the Rome Statute, 2) the person(s) against whom the crimes were committed must be a citizen of a state party to the Rome Statue or 3) the UNSC must refer the case to the ICC…unless you are the United States, in which case you are immune. The ICC is an incredibly important international organ because, unlike its predecessor the International Court of Justice (ICJ), where only states can be parties in a case, the ICC allows for the trial of individuals for crimes committed.

The Libyan referral marks the first time in the history of the ICC that the United States has ever supported a UNSC referral to the ICC, and only the second UNSC referral to the ICC ever, the first being Sudan in 2005. In both instances, the US made it quite clear in the resolutions that no non-Sudanese/Libyan citizens who were not citizens of a State Party to the Rome Statute could be prosecuted, a defensive measure to prevent the arrest of any US nationals in the countries in question.

This is a very important step forward for the international legal system. The US has historically been very reticent about joining the ICC, and this show of faith in the work that it does could potentially have very positive ramifications for the support the ICC receives as it brings criminals who commit massive injustices to trial.

And, hopefully, the ICC will be better received than it was when it issued an arrest warrant for Omar al-Bashir, the President of Sudan, in 2008. The international community, was very mixed in its reaction to the warrant. The African community, with an especially strong voice from Libya’s Muammar Gaddafi, condemned the ICC as acting to usurp African sovereignty, and refused to arrest Bashir and turn him over to the court. The ICC’s case was not helped by the very strong economic ties between Sudan and China, and the unwillingness of the US to interfere in that relationship.

We could be on the brink of a new era in international law where international cooperation will see to it that those responsible for the mass violation of individuals’ human rights are individually held accountable for their actions and brought to justice. The shift in policy of the US is definitely indicative of the differences between the Bush and Obama administrations, and hopefully this new openness to international law will restore the legitimacy that the ICC lost after its failure to arrest Bashir.