The University of Oregon and the Global Oregon Initiative recently announced an interesting—and controversial—partnership: a partnership with the government of Gabon. This one-of-a-kind cooperative agreement has a noble purpose: to establish joint research centers in Eugene and Libreville in order to study sustainability, economic development, and natural resource management. However, the union is problematic because of Gabon’s difficult history and legacy of corruption, and especially because of the history of human rights abuses in the nation. 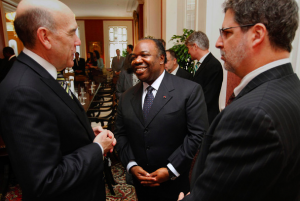 years and had a wide variety of human rights violations and corruption charges leveled against himself and his family. So far Ali Bongo seems to have worked to improve the situation in Gabon, especially in regards to human rights and to the environment, but the memory of his father’s harsh rule has not yet faded.  Further, Ali Bongo became President through a highly contested election many consider to have been fraudulent.

Many think that Ali Bongo will bring change, however. Dennis Galvan, associate professor of international studies at the University of Oregon and one of the major players behind the partnership, insists that Ali Bongo is committed to change and good governance, ending corruption, and addressing the needs of the poor. Bongo himself has stated that he is working hard to reduce corruption and to build a government that is transparent and ethical. On the other hand, a profile of Gabon published in a 2009 issue of the New York Times revealed that 60% of the population lived on less than $2 a day and only 10% of the roads were paved, while the Bongo family has over 3 dozen real estate holdings in Paris.

Whether or not Ali Bongo reverses the trend and remains committed to democracy and good governance, the partnership seems like it will be extremely beneficial to both countries. Gabon is an oil-rich country that for decades has relied almost solely on this one resource, but now that their oil-based economy is dying they must quickly find a way to diversify. This partnership with the University of Oregon will help Gabon transition to sustainable natural resource management and low-impact ecotourism while investing more in education and human capital, which in turn will help boost the economy and ensure that the country will not collapse when there is no more oil. Gabon will become the sustainable development model for Africa, a great gift considering the nation has national parks over 11% of the country and rain forests covering a large portion of the rest. Since Oregon is at the forefront of sustainability and green development in the U.S., the union of the two makes perfect sense.

The concept behind the Gabon-Oregon Transnational Research Center on Environment and Development is fairly straight-forward: students from the five Oregon universities involved in the partnership will do study-abroad, internship, and research programs in Gabon, while Gabonese students will do the same in Oregon. The programs will help Gabon modernize its education system and promote research, and the focus will mainly be on issues like environmental management, ecotourism, sustainable development, and green business. It seems like an ideal program: Oregon has plenty to teach, Gabon wants to learn, and world benefits from Gabon protecting its diverse flora and fauna and promoting ecotourism and sustainable development in Africa.

The only hitch is the threat of the return to the corruption and human rights violations of Omar Bongo’s rule. It seems for now that Ali Bongo is on a good track, but who can say what will happen five years down the line? I am glad, though, that the University of Oregon agreed to this partnership early on, rather than waiting to see what will happen with Ali Bongo’s presidency. If the oil were to dry up in a few years and Gabon had been unsuccessful in finding a partner to help it diversify its economy we could have much larger problems on our hands than the potential threat of a return to Omar Bongo-style leadership. Plus, we could lose a lot of rainforest and endangered species in the intervening years. So for everyone’s sake, I hope that this partnership is long and fruitful, that Ali Bongo remains dedicated to ethical and transparent government, and I applaud the University of Oregon and the Global Oregon Initiative for taking such a courageous step in the face of vehement protests.