Opportunity in the Developing World

When my sister recently got married, my parents and I traveled to Taiwan to throw a wedding banquet so our entire family could be together.  My parents splurged on one of the fancy menus at the banquet hall so that my sister would have “nothing but the best”.  As we ate course after course of food, a bowl of soup came out for everyone.  I am an avid lover of soup so I excitedly dug in and ate until I encountered something I had never eaten before.  After a few minutes of chewing on this gelatinous piece of mystery, I ventured to ask my mom exactly what I was eating.  After informing me that I was eating shark fin “in honor of this joyous occasion” I panicked and didn’t eat anything else for the remainder of the meal, in fear I’d ingest something else that was cruelly and wastefully slaughtered.

Shark fin soup has been a delicacy for East Asians (mainly Chinese and Taiwanese) for hundreds of years, but was previously reserved for only the emperor and his guests, or the wealthiest families.  When middle class individuals in China and Taiwan began to earn more money about 20 years ago, shark fin suddenly became more attainable.  Shark fin soup – while still very expensive – has managed to become a staple in menus served at parties, weddings, or any function where the host wishes to honor the guests (or simply show off).  This has caused shark finning to quickly gain momentum in the fishing industry and has placed an immense strain on the shark population in an unprecedented amount of time.  Tens of millions of sharks are killed each year only for their fins.  Once caught, fishermen cut off their fins with stunning efficiency before 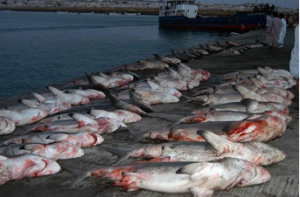 throwing them back overboard to drift to the bottom of the sea, helpless and no longer able to swim.  What follows is I’m sure a slow and agonizing death.

Even though shark fin soup is a delicacy that originated in China and Taiwan, shark finning is a practice that transcends borders, causing shark fin soup to no be longer limited to these areas of Asia.  Chinese restaurants all over the world now serve this dish, prompting more shark finning and more legislation in some areas.  European countries are actually a huge exporter of shark fin to China, and even Central and South American countries like Costa Rica and Ecuador are trying to cash in on this business. Some countries have made the decision to deem shark finning illegal but that still hasn’t stopped fishermen from capitalizing on the big paycheck they can collect for a few pounds of fins.  Others have enforced a maximum amount of shark fin that can be brought to shore, or stipulated that the entire shark with the fins still attached has to be brought back.  Monitoring the fishermen at sea is difficult but it’s unfortunate that even once docked at the ports, there is still no enforcement of the “required” shark to fin ratio.  This past year, the EU revised its 2003 legislation to close the legal loopholes that still let shark fin fishing slip by.  Even more recently, San Francisco passed a shark fin ban.  But people have and will naturally find ways around the law.  Many still capture an undocumented number of sharks and bag the fins.  They keep only a few of the smaller sharks on board and continue to toss the others because they take up too much room on the small boats.  The excess fins collected are hidden and then sold later.  The steadily declining number of sharks is thus largely a result of fishermen ignoring laws, in combination with lax enforcement.  While I originally thought that all we needed was stricter controls to ensure fishermen are complying with the law, I now know that won’t solve the problem.

We also cannot look at shark finning merely from one point of view.  While it is devastating that shark populations are dwindling and that sharks are killed so inhumanely, there are bigger repercussions for people across the world as well.  Just because some countries have created laws that demand sharks be brought with fins intact, this will still do nothing for fishing or ocean sustainability.  As the predator at the top of the food chain in ocean water, sharks are important in keeping the ocean environment healthy.  But when they are overfished, ecosystems are destroyed.  Sharks keep other species of fish in check to ensure that all ocean life is in balance. For example, in waters where sharks are most endangered there have been reports of an overpopulation of stingrays (one of sharks’ favorite snacks), meaning that the stingrays have greatly reduced shellfish population, and water quality has declined since there are no longer enough shellfish to filter the water.

Because shark finning is a global problem that has global implications, I think that most efforts should go into educating and promoting awareness among the population.  Since I previously discussed how fishermen are still catching sharks for their fins in the face of so many laws, we should hit the root of the problem, which lies in the demand for shark fin.  Because China and Taiwan are the largest consumers of shark fin, they will also have the largest impact on attempts to bring a stop to the industry.  These two East Asian populations also believe in medicinal qualities of eating shark fin; these educational and awareness campaigns should also point out how eating shark fin isn’t as healthy as everyone believes it to be.  Sharks actually contain dangerous amounts of mercury, more concentrated than of all other fish.  Thus, increasing public awareness of the shark’s role in the ecosystem, its rate of extinction due to the demand for shark fin soup, and potential health hazards may be the best hope for the shark.  Just because these atrocities occur out in the ocean and are hidden from sight, doesn’t mean that they should be hidden from public knowledge.  For a magnificent creature that has lived hundreds of millions of years, it would be a tragedy to see them killed off in a few years time.  For two grisly, but informative videos, please watch the award-winning Sharkwater documentary, or Chef Gordon Ramsay’s Shark Bait.