One of the most pressing issues the Iraqi people face today is a shortage of potable water. In 2010, the International Community of the Red Cross estimated that one in every four Iraqis did not have access to drinkable water. Iraq is known as the land of the two rivers, the Tigris and the Euphrates, which have fed Mesopotamia life giving water for thousands of years. Until relatively recently, Iraq has had an ample supply of water in spite of its vast amount of desert plains thanks to these rivers.

It wasn’t until the 1990s that Iraq began facing a severe shortage of water. When Iraqi forces invaded Kuwait in 1990, economic sanctions from around the globe combined with US military attacks on water treatment plants in Operation Desert Storm damaged Iraqi infrastructure and spurred the current water crisis. From this point on, Iraq has lacked the capability to cleanse enough water to care for its people. Hundreds 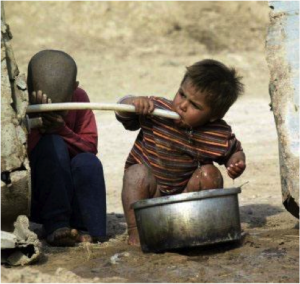 of thousands of Iraqis have died since then, in part from lack of clean water. This applies in particular to young Iraqi children, who are more susceptible to water-borne diseases than adults.

After the 2003 invasion of Iraq, the water shortage became much worse, leading many Iraqis to dig their own wells in an effort to access the groundwater beneath their property. Efforts undertaken by the United States Agency for International Development (USAID) to rehabilitate Iraqi infrastructure, including water treatment centers, received criticism for failing to complete planned projects that addressed issues such as the water shortage.

So who is currently working in Iraq to make a difference with this issue? This question isn’t quite so easy to answer as it may have been 5 years ago when many countries were involved militarily in Iraq. As the security situation has improved and countries have withdrawn forces, the interest of the international community in assisting Iraqis has decreased. But as I argued in a previous post, basic needs like water and electricity must be provided if Iraq is to maintain any semblance of security and stability. A chronic shortage of water will undoubtedly continue to exacerbate tensions in the region, something Iraq cannot afford to deal with in light of the upcoming US troop withdrawal.

A website dedicated to providing a list of clean water projects in Iraq has little to show from the past few years other than continual posts that discuss the poor situation of Iraq’s water resources. If the main organizations such as USAID have moved on, now is the time for the smaller, more specialized groups to make a difference in Iraq. Veterans for Peace is one of the only organizations claiming to assist Iraqis in getting clean drinking water that is still posting updates regarding their efforts and successes.

Generosity Water and Charity: Water are two organizations that have made a difference in a number of countries around the globe when it comes to providing clean drinking water. What is stopping them from getting involved in Iraq, a country in desperate need of this resource? Though the security situation isn’t ideal, it is far improved from what it once was. As the country moves forward in relative stability, these organizations need to be encouraged to act before it is too late. The experience of the team members in these organizations combined with the expertise of local Iraqis dedicated to the cause could lead to a brighter future for all Iraqis, who deserve plentiful drinks of clean water just as much as the rest of us.