On Tuesday, I wrote about the basics of Iraq Aid, pointing out a few of the key issues that are being addressed by international aid organizations. One of the most influential of these organizations is the United States Agency for International Development (USAID), which has provided over $7.4 billion in aid to Iraq since 2003. But has that money gone to the best use?

USAID has provided assistance in various ways. Initially, it dealt with infrastructure, health care, education and helping Iraqis form a new government. Starting in 2006, USAID championed a new program, the National Capacity Development Program. The program is also known by the Arabic word for development, Tatweer. The program 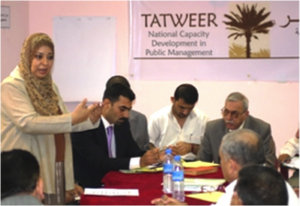 focuses on technical assistance to Iraqi ministries, training of personnel and procurement of equipment. To date, the program has helped train over 100,000 civil servants in classes that are now mostly taught by Iraqi graduates of an earlier course. These classes seek to “restore the Iraqi government’s ability to conduct its own capacity building activities. Tatweer also boasts that it has led to “significant improvements to procurement, project, and budget management procedures across ministries and provinces.”

Most recently, Tatweer has turned its attention to assisting the Iraqi government in the development of the National Development Program (NDP), which is how the government plans to improve Iraq’s social, economic and environmental conditions over a five-year period. This program hopes to fuel partnerships between the public and private sectors, the later of which it hopes to increase dramatically by encouraging foreign investment. In keeping with its anti-corruption mantra, Tatweer recently developed a framework for monitoring the NDP through a series of checkpoints meant to ensure the program is on track.

All of these programs are worthwhile because they have the broad goal of helping the Iraqi people run their own country in a sustainable fashion. But an issue arises when one considers the environment in which these programs are being released. As I mentioned on Tuesday, the electricity situation in Iraq is abysmal. Despite the doubling of power generation since 2003, demand for electricity has risen sharply, leaving most cities to repeatedly deal with rolling blackouts. Power generation and distribution is shared across Iraq’s provinces, so when one province suffers, so do the others. When the constituents of a northern province complained about a lack of electricity earlier this year, that province cut its supply to Baghdad. Generally speaking, there is a greater supply of power in Kurdistan, the northern portion of Iraq, than anywhere else in the country.

Without reliable electricity, Iraqis will hardly be able to make full use of the programs USAID is offering. USAID prides itself on helping Iraqis in every province of the country. Considering the unequal distribution of power generation, USAID could focus on designing a system where the sharing of electricity between provinces is mutually beneficial. The Kurds of the north have been fighting for greater political representation in recent years, something Baghdad has been reluctant to offer. By modifying the training already in place under the Tatweer program, couldn’t USAID help the Iraqis iron out a plan that would help satisfy the reasonable demands of each side?

This would allow USAID to further their initial efforts of rebuilding infrastructure with the developmental programs they are currently focusing on. Because of its comparatively large budget, USAID stands to make a bigger impact than any of its peers in the NGO field. How it decides to wield this influence could make a massive difference in the future of Iraq.