Until recently, there was little reason to doubt that the 2008 Status of Forces Agreement (SOFA) between the US and Iraq would be honored and all US forces would be out of Iraq by December 31st, 2011. As the deadline nears, the agreement is being called into question. This is a mistake. Withdrawing US forces from Iraq is the right and necessary course of action. An extension of the presence of US forces would undermine the legitimacy of the Iraqi government and has the potential to lead to prolonged instability, something we can all live without.

Nouri al-Maliki, Iraq’s Shi’ite Prime Minister since 2006, was, until recently, an ardent supporter of complete US withdrawal.  In late December of 2010, al-Maliki stated that 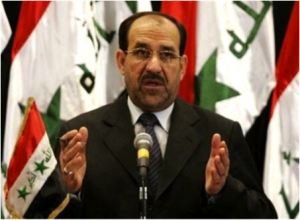 the Iraqi security forces were capable of handling the affairs of Iraq and that an extension of the SOFA was out of the question. But just this week, al-Maliki announced that he would consider extending the presence of US forces if enough Iraqi leaders agreed it was the right course of action. He said that a decision would be reached by the end of the month, but considering it took a year to sign the first SOFA, the outlook of ratifying a new plan by the end of the year is quite grim.

Even if al-Maliki was able to pull off some sort of accelerated drafting and negotiation process, chances are the currently elected Iraqi government would collapse as a result of an extension. In the 2010 elections, al-Maliki relied heavily on support from Muqtada al-Sadr, a pseudo Shi’ite cleric who commands the Mahdi Army. As al-Maliki started voicing concerns over the US withdrawal, al-Sadr made clear his intent to destabilize the country through violent attacks if US forces stay any longer than the current SOFA allows. Al-Sadr holds stifling sway with poverty stricken Shi’ites in Baghdad – if he turns on the sovereign Iraqi government, many will follow.

Another point to consider is what all goes into a military withdrawal. As it stands, the US has 47,000 troops and some 70 military bases constructed in Iraq. Altering the plan to deploy or redeploy tens of thousands of troops requires a staggering amount of preparation and planning.

Until now, the outline of the agreement has been followed and most has gone according to plan. There was no massive resurgence of violent attacks when US combat forces withdrew from Iraqi cities in the second half of 2009 as some predicted. By 2012, the Iraqi security forces should be savvy enough to maintain their own country, something the US was counting on when it designed the SOFA. The US shouldn’t waver in its belief that the training we’ve offered the Iraqis will be adequate for them to fend for themselves.

On the US side, politicians and commanders have been careful to not outright advocate an extension of the SOFA. Instead, they have continually urged the Iraqis to make their own decision. Admiral Mike Mullen, the Chairman of the Joint Chiefs of Staff, recently explained that there is currently neither a plan nor a request from the Iraqi government to extend the presence of US troops.

This is a positive point, as the last thing the US needs to do right now is pressure the Iraqi government into making a decision the Iraqis will resent. Honoring the 2008 SOFA and withdrawing on the current timetable is the best way to keep Iraq from falling once again into the dark abyss of instability.