A World Bank estimate suggests that 25% of the 1.3 billion most impoverished people in the world experience some form of disability, and according to the UN Development Program, 80% of persons with disabilities (PWDs) live in developing countries. These 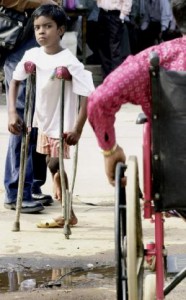 numbers are steadily increasing due to a number of factors related to poverty, including increasing numbers of children who develop disabilities as a result of malnutrition, disease, child labor, or armed conflict and violence, and the rise of alcohol and drug abuse linked to stress. Poverty and disability establish a vicious cycle. Those in poverty have a higher risk of acquiring disabilities, as they are more likely to be exposed to hazardous working and living conditions, and they are also the group with little access to health care and vital nutrition. The unfortunate flip side is that those who are disabled are then often physically barred from employment, accessible health facilities, social programs, and social networks, leading them on a downward spiral of prolonged poverty and worsening health conditions.  This is especially true in developing countries that struggle to provide these very resources to even the larger non-disabled population. Therefore, the disabled poor are among the most in need of strategies to level the playing field, but are the most likely to be excluded from them.

Disability is not the enemy. The problem is not the experience of physical impairment or the state of being disabled, but the stigma, exclusion, and the lack of economic and social opportunities which ultimately prevent PWDs from fully integrating into society. Disability rights advocates today have embraced the social model of disability, which shifts away from medicine, rehabilitation, and finding cures, to examining the physical environments and cultural perceptions that artificially create differences among disabled and non-disabled individuals. The rights-based approach asks policy makers and societies to remove these barriers in order to level the playing field.

Social and cultural stigmatization in itself is enough to bar individuals from certain levels of opportunity. But add to that another unjust, institutionalized form of exclusion: development strategies that overlook disability while claiming to alleviate poverty. To start with, the language in documents that address poverty reduction often vaguely imply disability with phrases like “vulnerable” or “disadvantaged groups.”  Those could mean anything! When targeted groups aren’t specifically identified, there is no impetus to actively include their needs in policies. Nobel Prize-winning economist Amartya Sen has noted that even the Millennium Development Goals only indirectly address disability, by focusing instead on poverty, education, and health care provision. Without a specific focus on the issue of disability, it is unlikely that these goals will be achieved.

Grameen Bank, which oversees Bangladesh’s widely-celebrated micro-credit program, is a successful example of an institution that empowers poorer women in rural areas.  However, a 2007 study of Chuadanga, a rural Bangladeshi village, revealed that despite the efforts by development organizations to extend micro-credit programs to PWDs, the negative attitudes of the community prevented these schemes from working. Since obtaining a loan requires mutual trust among self-selected peer groups, stigmatized individuals who are perceived to be unreliable were excluded. The research thus revealed that only 8% of women with disabilities were members of credit-lending programs, as opposed to 90% of able-bodied women. This is an especially dismal statistic for one village, if one considers the World Bank estimate that up to 8.8% of the Bangladeshi population, or 9 million people, have disabilities. What does this mean for an entire nation? Despite the adoption of the Persons with Disability Welfare Act of 2001 and the establishment of a 10% employment quota for PWDs, there have been few, if any, governmental efforts to raise awareness to change social perspectives on disability. The solution? The government should adopt an aggressive national program that will measurably elevate the socio-cultural status of PWDs, in much the same way that it has elevated the status and contributions of women.