The word “Hamas” tends to elicit a strong response whenever mentioned. There are few people on the fence when it comes to this Islamist political party; most are either tenacious supporters or resolute critics. Perhaps these polemical views have justifiable roots, as either side has an ample supply of news that can be interpreted to defend one side or the other. Israel and the occupied territories are never far from the headlines. Considering Hamas’ prominent role in the ongoing conflict, most recently as the party in control of the Gaza Strip, it stands to reason that it is often mentioned.

The violent actions taken by Hamas since its inception are unquestionably deplorable. They are responsible for 426 terrorist attacks since 2000 alone, 58 of which were suicide bombings. Ismail Haniyeh, a senior Hamas leader, recently condemned the United States for killing bin Laden – hardly the sort of declaration that could or should help win Western support. Nor is Fatah, the Palestinian political party that rules the West Bank, without its problems. Corruption haunts its ranks, leaving international powers to question whether or not the money they pour into Fatah is actually doing any good. By some estimates, members of the Palestinian Authority, mostly controlled by Fatah, have siphoned off $700 million of public funds to their personal accounts. Regardless of its issues, Western powers have continued to support Fatah in hopes that it will be a partner in peace with Israel. From the West’s perspective, it is, often times, the lesser of two evils.

When a potential unity deal between the two parties was announced last week, people were quick to jump to conclusions. The last time a unity government was formed 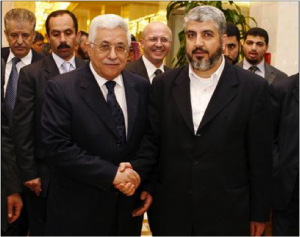 between these parties was after Hamas’ surprising electoral victory in 2006. The coalition quickly collapsed, leading many to believe that the two would never see eye to eye on enough issues to form a working partnership. The deal, officially signed yesterday in Cairo, led many commentators to quickly construct the worst-case scenario, a common response to issues in the Arab-Israeli conflict. According to this narrative, Fatah, led by the beleaguered Mahmoud Abbas, was finally giving up on peace negotiations with Israel. By aligning with Hamas, a group openly sworn to the elimination of the state of Israel, any chance of Israel trusting Fatah to be a partner in peace had been destroyed.

This narrative is dangerous because it fails to take into account a critical element of the deal: Hamas will no longer be making unilateral decisions, which typically end in violence and harm the peace process. Anything that works against unilateralism, which increased on both the Israeli and Palestinian side since the Al-Aqsa Intifada of 2000, should be encouraged. Because of this deal, Hamas will be acting within a national plan that takes into account the goals and policies of Fatah, a party that has previously demonstrated its willingness to discuss a peaceful resolution to the conflict with Israel. The deal, though not without its flaws, does have the potential to soften Hamas’ hard line stance. How much potential it actually has remains to be seen.

We cannot necessarily count on something good coming from the deal, but considering it is now a reality, we must look for a sign that it could lead to a brighter future. If this deal can truly put an end to the trend of unilateralism on one side, we have cause for a very cautious optimism in spite of the potential that Israel just lost a partner in peace. If nothing else, this deal may produce an opportunity for bitter adversaries to sit down and talk, a much-preferred alternative to launching rockets or F-16s.