Running Out Of A Renewable Resource

I’m just going to start off with the disclaimer: I love the movie The Pursuit of Happyness. I really do. However, I have one major objection to the film, which I would like to discuss with you.

For those of you who haven’t seen the movie, here’s the SparkNotes version: A man named Chris Gardner invests all of his life-savings into an expensive set of bone-density scanners, which he hopes to sell for great profits to doctors and hospitals. The problem? The scanners are an innovative, yet completely unnecessary expense, which most hospitals don’t want or need. His near-sighted and foolish decision quickly plunges his family into debt, as rent 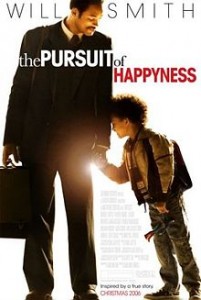 checks, taxes, and numerous other bills all begin to pile up. Before he knows what is happening, his wife has left him, he’s kicked out of his own apartment, and is forced to live on the streets of San Francisco with just a few dollars to his name. Desperate for a steady job, Chris takes on an unpaid internship with Dean Witter with the hopes of earning himself the one (very high-paying) job as a stockbroker with the company at the end of the six month program.

The Pursuit of Happyness resonates so profoundly with viewers because it is the classic rags-to-riches story. Chris Gardner takes the risks. He puts in the long hours. He proves his worth, and (spoiler alert) ends up landing himself the coveted job at Dean Witter. He continues to climb the ladder of success, founding his own investment firm, by the name of Gardner Rich, and eventually sells a minority stake in his brokerage firm in a multi-million dollar deal several years later. It’s the epitome of the American Dream.

Viewers love seeing one man’s journey from the depths of poverty into a self-made businessman. After all, that’s what America’s all about. We’re the land of opportunity. There’s nothing that makes us happier than when people “pull themselves up by their boostraps”, and actually make a name for themself. We’re left inspired. Exhilarated. In awe of Chris’ ingenuity, grit, and determination to do whatever it takes to accomplish his dreams. In the words of one IMBd user:

As I watched him I was inspired greatly! As my wife said “Look at his attitude and the way that he ‘carried’ himself through all of it. He didn’t bring on the feel sorry for me thing.” That truly he would have had every right to disclose his problems, but he simply kept on keeping on, until…. he won!! I think every good American should watch and get inspired by this story. It makes you think and feel, it changes perspective. Bravo Mr. Gardener. Recommended highly. You’ll learn a lot, this story is priceless.

Similar responses were documented in many online reviews of the film. Viewers were taken by Chris’ optimistic spirit and relentless work ethic. Words like “uplifting”, “heartwarming”, and “inspiring” could be found in nearly every review, as viewers were swept away by Chris’ journey.

The problem with stories like Chris’ is that they are often the exception, not the rule. He’s the one in a million, the anomaly, the lucky one who was fortunate enough to break free of the oppressive cycle of poverty and homelessness. The inevitable reality, which the movie ignores, is the fact that sometimes a dedicated work ethic and an optimistic spirit are simply not enough. 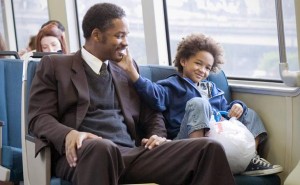 The film gives viewers the misleading notion that with enough hard work, perseverance, and determination, anyone can pull themself out of the cycle of poverty. It fails to fully capture the greater social structures, functions, and mechanisms that are at play, and focuses solely on the role of the individual. It allows the myth of meritocracy lives on, simply disguised as the American Dream.

Do I think that there’s a need for more movies, which highlight positive portrayals of individuals who are experiencing homelessness? Of course. Too often, Hollywood falls back on homeless stereotypes as individuals who are drunkards, addicts, or just plain delusional (sometimes even a combination of all three). Yet, I suggest that you heed caution before being swept away by the emotion and passion of the film. Sure, let’s applaud those like Chris Gardner who manage to break the cycle. Those who become award-winning musicians, athletes, and businessmen and women. However, let’s not forget about the others. The people who are trying their hardest every single day to break the perpetual cycle of poverty and homelessness, to no avail. Why are there no films focusing on those types of stories? About the people who fight for the American Dream every single day, yet find it slipping through their fingers no matter how hard they might try?

Because let’s be honest – that doesn’t make for a good Hollywood ending.