Running Out Of A Renewable Resource

Social media has become a fact for civil society. The ability to become involved with a social cause is literally at the tip of our fingers. Internet applications such as Facebook, Twitter, and Youtube facilitate the creation and exchange of user-created content on today’s social movements. Hype can be generated on social issues with explosive debates carried out through blogging, or changing one’s status on a facebook page. It gives those who participate in these campaigns an illusion of having a meaningful impact on the world. These types of users of social media 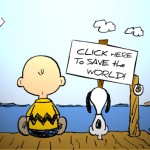 are often referred to as slacktivists.

The term Slacktivism as defined by Evgeny Morozov is feel-good online activism that has zero political or social impact. Over the past decade the growth of social media has been impressive.  We believe we are being active, maybe making a difference simply by clicking a button, or adding our name to a petition. Through social media, large numbers of people can sign up, to a campaign without too much being asked of them. This is because social media allows us to connect with any organization with little or no effort.

For instance one year ago, Invisible Children created a 30-minute non-profit video Kony 2012, and generated an unprecedented level of social media buzz. The video demanded the global community capture and send to trial militant leader Joseph Kony, in the International Criminal Court by the end 2012. The record-setting YouTube documentary, fueled an enormous social media phenomenon. While Kony is certainly famous, and perhaps among the most wanted men in the world, he is still at large. Kony 2012 received significant criticism across the web, but the films inherent criticism was its promotion of slacktivism. 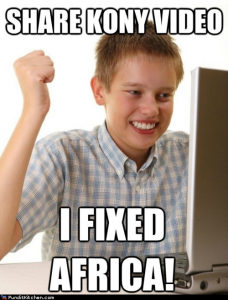 Facebook sharers, and twitter supporters of the Invisible Children campaign  were accused of being slacktivists. By tweeting, and adding their name to the Kony 2012 petition they were doing nothing to impact the Invisible Children organization . But does this mean using social media to generate awareness is a bad thing; is it fair to say everyone clicking a button is a slacktivist?

I think it is what we choose to do with social media and the information we receive that indicates whether we are slacktivist. Despite what we think about Kony 2012, there is no denying social media brought awareness to the plight of the Invisible Children. However, this is where our own personal responsibility becomes paramount.

Armed with awareness, it is now our responsibility to seek out the organizations in the afflicted areas that are directly helping the children, women and families after conflict. One such organization is the   International Rescue Committee (IRC) . The IRC has been responding to some of the world’s worst humanitarian crises for years. They have been instrumental in providing health services, safe water, and sanitation for hundreds of thousands of  Ugandans displaced by Joseph kony and his Lord’s Resistance Army (LRA).

In 2002, Uganda’s  Amnesty Commission  designated the  IRC  the lead agency in receiving and reintegrating into society formerly abducted children and young adults. Tens of thousand of children were abducted, turned into soldiers, porters, cooks, or sex slaves. Many were killed or forced to harm or kill others, including their own relatives. The IRC has included many former child soldiers as staff members as  they strive to restart their lives. They also train healthcare workers to provide clinical care to survivors of sexual assault.

Many of the women and girls gave birth to babies as a result of rape and sexual exploitation. IRC mental health workers are also trained to prevent mother to child transmission of HIV. The survivors, even after the conflict, are vulnerable to sexual violence and abuse stigmatized by their peers. The IRC work with local organizations to start innovative telephone hotlines where survivors can call to learn what services are available. They also started short-term loan programs for primary  women to try out business ideas. It is low cost way to provide financial services to the poor in rural areas, where banks are reluctant to invest.

They IRC do not only work in the fields. They are involved in informing politicians and diplomats around the world about the crisis wrought by the LRA.  The members work with policymakers and journalist, and lobby for action on behalf of the victims of the LRA.  In recognition of their work the IRC president George Rupp was invited to the White House as President Obama signed into law the Lord’s Resistance Army Disarmament and Northern Uganda Recovery Act of 2009.

Kony 2012 video provided us with information on the plight of the Invisible Children. But, we fell short when we got caught up in the hype of Kony 2012 and didn’t do the necessary research to be effective. Instead of just raising awareness, research the issue and support organizations like the IRC, which make a real difference for the children impacted by the LRA.  If we claim we are concerned and have a desire to help, examine other  charities in the region that are associated with resettling the children, and getting them the aid they need. Seek out organizations that are directly involved in with working with the children at the heart of the crisis. Seek out ways to assist the children, their families and the organizations that work to get them resettled and reunited. It is organizations like the IRC that continue to work with survivors of that era, that deserve our attention and donations.

It is not about social media, or the way in which the message was delivered. It is now about being armed with the information and what we choose to do with it. The next time a cause is flashed across social media. Let us not be accused of being a loud campaign in virtual space.