Environmental awareness and protection campaigns have become a ubiquitous staple in the global media diet.  It seems that movements to search for alternative energy resources and investing in biofuels have become a mantra for a plethora of countries.  Protecting the planet is without a doubt an important matter to focus on, but what happens behind the scenes?  How are small farmers, their families, and developing world populations as a whole affected by the frenzy to increase dependency on biofuels?  In Guatemala’s case, the answer is startlingly simple: the demand for biofuel has led to a hunger crisis spanning across the nation.  As countries like the United States attempt to reduce their carbon dioxide production, populations in Guatemala and other third-world nations suffer from the hike in food prices.

As is the case with thousands of issues affecting our world today, globalization has played a major role in spreading the reach and power of biofuel companies.  New environmental protection laws passed in Europe and the United States focus on increasing the use of biodiesel and corn based ethanol in cars. According to economists, the laws have had a massive ripple effect on the production of crops such as corn.  Land that was once dedicated to grow food for people is being used solely for fuel, leading to a sharp rise in corn prices.  In the U.S. alone, 40% of domestically grown corn, which is approximately 15% of the world’s corn production, is being used to manufacture bioethanol.  The statistics may not seem much to consider at first, but they have profound effects on Guatemala.  The Central American country imports over half of its corn, and with the U.S. using a huge chunk of its crops to fuel cars, people are demanding more corn than the market is supplying.

So why doesn’t Guatemala fill in the supply gap by growing and consuming its own corn?  The answer to the million dollar question revolves around European biodiesel companies, the U.S. subsidizing its own corn producers, and the fact that only a small group of wealthy families control Guatemala’s farming land.  Biofuel 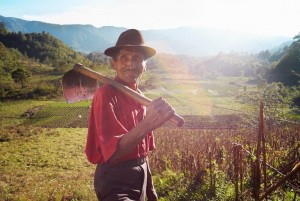 corporations set up leases with these families and other local companies, making it more profitable for the landowners to set aside property for European corporations rather than renting land to indigenous farmers.  As local farmers lose their land, they find it difficult to both make a profit selling crops and having enough left over for their own uses.  Today, a majority of Guatemala’s fertile land is being used to produce in-demand bioethanol crops like sugarcane and African palm.  As small groups of people get richer, a vast majority of Guatemalans are unable to afford corn, sugarcane, and other staple diet foods.

This leads us to analyzing an issue that pits “environmental awareness” with a hunger crisis sweeping through a myriad of developing countries.  While I applaud the West for looking into alternative energy sources, I find it deplorable that millions of people are starving when enough food is being grown to feed them.  Furthermore, when the pollution reducing statistics are analyzed, the results show that increasing biofuel dependency, without proper policies, is counter-productive.  In order to meet biodiesel mandates, in Europe alone, thousands of acres of natural ecosystems need to be converted into farmland, thus skyrocketing carbon dioxide and other greenhouse gas emissions.

Perhaps the most effective way towards finding a solution to the hunger crisis, and dealing with the environment, is to remove major biofuel corporations from the picture. Instead, countries like Brazil, known as having the first sustainable biofuel economy, can aid Guatemala and similar nations in utilizing the correct agricultural tools and methods towards making their own “greener” economies; however big or small they may be.  In this way, acres of land will not be reserved solely to meet the mandate requirements of the European Union.  For the EU, more focus should be put on Europe’s strongest alternative energy source: wind energy.  The European Environment Agency has conducted studies, proving that wind power can exceed Europe’s electricity demands three times over by the year 2020; making it one of the most effective and sustainable energy solutions for the region.  In America’s case, it may be better to annually reassess bioethanol production based on price fluctuations for corn, thus making it easier to see how developing countries are being affected by a decreased supply of corn for food.  Regardless of which solution is explored, it is clear that the world can go “greener” without leading to a starvation crisis for millions of people.