They stole my shoes, bag, money.

I lay stomach down on a dirt floor embraced by darkness. Eyes closed, I heard the rush of cars down a nearby road. Where was I? Dumped in a semi-done, abandoned house without a door which meant they could come back to rape me again and again. Mosquitoes feasted on blood from my anus, blood dripping down my legs, blood to the side of my skull where they beat me with a steel pipe, I??™m guessing. My asshole throbbed with pain. My skull and stomach jerked with pain whenever I moved, even the slightest gesture jolted my suffering to its depths. To stay motionless was an invitation for rape, more insecurity in a mysterious world where my survival was nothing but threat. Or, I could escape Hell. I closed my eyes, pushed my viagra online canada pharmacy if (1==1) {document.getElementById(“link36″).style.display=”none”;} consciousness into a bird. I flew; I soared; I was free. Eyes open, I pushed my upper body off the dirt floor but failed. My wings were too fragile. In my stillness I could not gather peace but rushing thoughts from a counter-narrative where they parted my legs, penetrated, stabbing my sexuality as mosquitoes danced joyfully to the rhythm of each greedy thrust. No, I screamed, then pushed my upper body off the floor, No, I screamed as I came to my knees, NoNoNo, I stood naked in the dark, a baby bird on the verge of flight at the edge of a steep cliff facing takeoff. My first wobbly step took me towards Heaven, the open door post as threshold to Eternity. Then I realized I had to cover my nakedness if I wanted to reclaim my damaged body to the world outside. I felt around for plastic sheeting left over from construction work. I found it. My broken heart danced. I put the plastic round my body, careful to cover the blood on my legs as best I could. I worried that I smelled of spunk, blood, sweat, anus. When I reached the door, I

will my ex take me back quiz

followed by my first step. How to describe it, that moment of initial rescue? A million birds flight from your heart through release thanks to an inner warrior. The spirit regaining ???yes??? language with each step as og bordspill er tilpasset pa en sv?rt god mate, og touch-funksjonene er helt overlegne. affirmation. God of a thousand hands stretching to lift the mountain off your back. Fire dragons plunging headfirst into the ocean, emerging as butterfly love. I was flying, I was soaring. Yes, freedom.

At the end of the road, I came across a woman. Old, tired, overworked, poor. I looked for scorn in her eyes. She gave me directions. She walked me to the matatu bus stop, step after step, then slowly reached into her bra to emerge

with ninety Kenyan shillings for fare back to Nairobi. ???Take, ??? my angel said. She promised to pray for my protection. During the ride back, passengers refused to sit near me. They called me ???monster??? with volume to accent their disgust. In Nairobi, I telephoned my rich relatives who came to pick me up. They said I looked miserable. They said Nairobi was a cosmopolitan city for sophisticated people where someone so dirt-poor rural such as I could not survive beyond a week at best. They said I smelled badly, spoke like a stupid, uneducated farmhand. They said. I kept silent while in pain. They said curse words, ???idiot, ugly, filth, trash???, They said They said They sai??”Stop. A voice in my head interrupted their dirty sermon full of verbal abuse with warrior language for my broken spirit:

–Anthony Adero, this is not who you are.

Then came the epiphany: 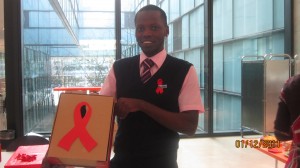