Chivalry is dead. Or at least that’s what some people say. However, is it for the better? That’s what’s up for debate.

Last week, in one of my classes, we had a heated discussion over whether or not you should hold the door open for a girl. The classes’ response was a resounding “yes”. We come from a school where everyone holds the door open for everyone else. It’s part of the culture. However, then our teacher threw in a ringer – “You know that only started so that a man could check out a woman’s backside as she walked through right?” 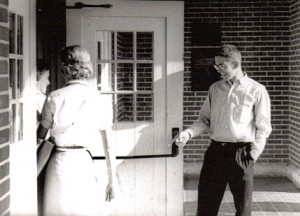 The only reason? I’m not so sure. However, it does speak to the larger question regarding manners and etiquette in a so-called “post-chivalrous era”. Should the woman refuse when a man pulls out the seat for her on the first date? When he proceeds to pay the entire bill? Is it rude if she does so? Or is she simply standing up for her beliefs? We’ve come to a cultural crossroads of sorts.

And honestly it’s easy to see why such a crossroads exists. On the one side, there’s blatant or hostile sexism, which includes name-calling, offensive jokes, and unwanted sexual references. Domestic violence and sexual harassment in the workplace are also examples of hostile sexism. Most people now consider hostile sexism to be inherently wrong, or at harmful to greater society.  However, there’s also “benevolent sexism”, a more subtle version of sexism, often disguised as “old fashioned chivalry” or simply “good manners”. That’s where our problem lies.

In the words of The Huffington Post, benevolent sexism is “a paternalistic attitude towards women that idealizes them affectionately… It includes well-intentioned behavior or philosophies that differentiate women as needing special consideration, having feminine skills or as being vulnerable”. It’s the mindset that women and children should always be the first people saved during a disaster. It happens when a man innocently offers to take the heavier boxes from his female companion. And it’s when a man purposely goes out of his way to open a door for a woman in his presence.

The problem with benevolent sexism lies in its perceived harmlessness. As stated in ScienceDaily, “While the path to benevolent sexism may be paved with good intentions, it reinforces the assumption that men possess greater competence than women, whom benevolent sexists view as wonderful, but weak and fragile”. Something as simple as opening the door for a woman may seem innocent, noble – maybe even romantic really. Who doesn’t want a Prince Charming to woo her, treat her like a royal Princess, and pick up her glass slipper (and dinner check) along the way? However, both benevolent sexism and hostile sexism are driven by the same idea – that  women are weak and vulnerable creatures, who are constantly in need of men’s protection. And that’s not a good thing at all.

So where does that leave us? In my opinion, the solution is simple. Just hold the door for everyone. There’s no need to run ahead of a woman, in order to assist her through the door. She is perfectly capable of opening the door herself. However, if you’re walking through a door, and somebody is right behind you, simply take the time to hand it off to the next person. More or female – it doesn’t matter. Gender should be irrelevant. It’s just basic common courtesy.

Politeness doesn’t have to go out the door (literally) just because you believe in gender equality. It’s simply about adapting old-fashioned manners to fit your newer, more gender-conscious ways.