Let’s talk about the Democratic Republic of the Congo. What about it exactly, you may be asking? Good question. Because up until last week, I had never even heard of the country mentioned in the media before. That’s before I learned that it was the location of the deadliest conflict in the world since World War II. 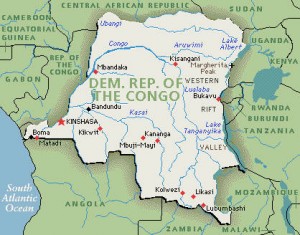 There has been widespread violence in the Democratic Republic of the Congo (DRC) since the mid 1990s (for reasons too complicated to fully explain in this short article), responsible for the deaths of at least five million people over the course of the last sixteen years. To put it in perspective, the average loss of life in the DRC currently is equivalent to September 11th occurring every two days, in a country that is only one-sixth the size of our own. So why exactly had I never heard of it before?

Technically speaking, the civil war is over. A peace agreement was signed in 2002. General elections were held for the first time in 2006. But the real problems? They’re far from over. Since reaching “peace” in 2002, living conditions have actually worsened in the DRC and are now among the worst in the world, according to the Index of Human Development. It’s estimated that approximately 45,000 people die each month due to conflict related causes (primary hunger and disease). Hundreds of thousands of Congolese have been displaced and rendered homeless due to the conflict. Around 80% of the population survives on less than $2 per day. So once again, I asked myself, why hadn’t I heard of the conflict before?

“Of the three broadcast nightlies, ABC World News gave the Congo the most coverage over those five years [2004-2008] —with nine stories total, or an average of less than two per year. NBC Nightly News covered the country six times and CBS Evening News brought up the rear with its single segment in five years. The PBS NewsHour did slightly better, with 20 mentions, or an average of four per year”. –Congo Ignored, Not Forgotten (Julie Hollar)

That’s a whopping sixteen stories total about the DRC on major nightly news reports (ABC/NBC/CBS) over the span of five years. No wonder I had never heard of it before. 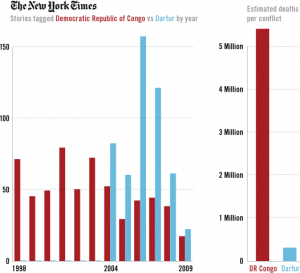 My goal is not to paint the Democratic Republic of the Congo as some war-laden country, desperately in need of saving from the West. That’s not why I’m writing this article, and that’s not why I think it should be plastered all over the news. My concern lies in the simple fact that I never even knew the conflict existed until it came to my attention in one of my classes this semester.

I believe that we have a responsibility – as citizens of the world – to know when such violence is occurring around the globe, that threaten the well-being, safety, and security of our fellow citizens.

I believe that journalists have a responsibility, a social responsibility, to report on such atrocities – and therefore ensure that they are brought to the public’s attention.

While that vision might come off as optimistic, idealistic, or in some people’s eyes – simply naive – I truly hope this to be the case. It is the responsibility of the journalist to open up people’s eyes to the events taking place both in their local communities, and around the world.  It is the responsibility of the journalist to keep the public informed on such events, and to begin to unravel the complexities, which surround such political and social conflicts. For news editors to assume that “no one is interested in Africa” simply because A. “the situation must be hopeless” and B. “therefore defying any chance of a solution” is both misguided and unethical.

Convince local media outlets that you do care about humanitarian interests, both locally and around the world. Write letters to the editor of your local paper, leave comments on online articles, tweet at your favorite television stations – utilize the technology at your fingertips to its fullest potential in order to voice your concern about the lack of coverage in the DRC… and wherever else such conflicts may be taking place (because let’s be real – you probably haven’t even heard of them yet).